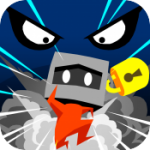 GameVision’s Mr. Runner (Free) series has proven popular on the App Store, garnering more than 5 million downloads across its normal and Plus (Free) versions. Yesterday a proper sequel to the original games appeared in the App Store, titled Mr. Runner 2: The Masks ($0.99).

Mr. Runner 2 is an auto-running game. Big surprise, right? However, unlike most typical runners that have you jumping over enemies and gaps in the terrain, you’re actually tasked with controlling your character’s speed in order to safely get through the very dangerously designed levels.

You see, as you run along, the ceiling will occasionally lower down to meet the floor. There are plenty of very fortunately-placed gaps in the ceiling though, so you’ll need to slow down or speed up your character so that you’re situated in one of these gaps at the time the ceiling decides to drop down, thus saving you from getting crushed. 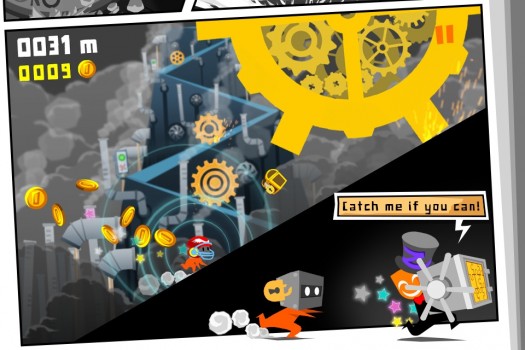 This is the same mechanic used for the previous Mr. Runner games, but here in this sequel just about every other aspect of the game has been fleshed out and otherwise improved. Graphically, the stark black and white and simple stick figure of the original has been replaced with vibrant, colorful, cartoon-like visuals. It really looks (and sounds) fantastic. You’ll also get a whole store full of different upgrades and power-ups to use, as well as an assortment of masks to outfit Mr. Runner with. The game is chock full of pop-culture and video game references, and I’ve easily spotted a dozen or so just in the first few levels which have made me crack a smile.

On the surface I really like all the improvements made in Mr. Runner 2 compared to the first game, but there are some things I’m not too crazy about. First and foremost is a lack of iPhone 5 widescreen support, as well as Universal iPad support, both of which are said to be coming in an update soon. Also, everything in the game seems so deeply tied to the in-game currencies and IAP that it always feels like it’s in your face. I’ll have to keep on playing to see just how skewed towards IAP anything in the game really is, but it was enough to stick out to me after spending just a short time with the game.

However, for the most part Mr. Runner 2 seems like a more than competent sequel to the first game, so if you enjoyed that then I imagine you’ll really enjoy what’s on offer here. It’s available right now, and impressions and discussion are taking place in our forums, so be sure to check it out.