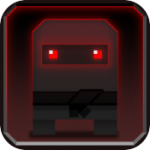 Away from the heart. You have to bounce the ninjas—no, punch them—away from the heart, not toward it. Indiscriminate punching isn’t good enough. “Defend Heart!" they said. You had one job, and you failed by scoring on your own goal, punching some guy right into your own vulnerable heart. There might be a metaphor there.

In Jared Bailey’s Fist Face Fight ($0.99), you’re a disembodied fist. A disembodied fist with feet, that is, fighting face ninjas with feet of their own. They aren’t particularly malicious ninjas. They’re probably just going about their days. But your heart is right there, exposed, helpless. So you punch, because that’s the only way to keep it safe.

You begin as any child starting karate class might, with a white belt. In the distance is your goal, the coveted black belt. Between you and it are quite a few ninjas and no shortage of punches. Each belt is functionally a level. White is easy – the ninjas will hardly have a chance as you tap them in their expressionless faces. Each time you earn enough coins to unlock a new belt the ninjas you have to fight get more dangerous. They’ll take two hits, three, nine. They slip in and out of reality. Things start to get chancy. 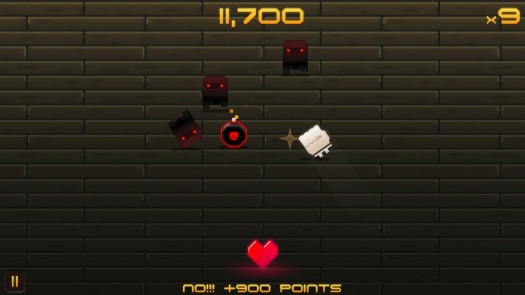 Sometimes the ninjas will drop coins when you fight them. Coins are good; you need them to unlock the next belt. Sometimes they’ll drop bombs. Bombs are bad because, well, they’re bombs. Stick with me here – this part is self explanatory.

You’ll learn to appreciate coins around the same time you learn to curse Jared Bailey. It takes a while to earn enough coins to progress at the higher belts. It took me a while even after buying the coin doubler, and then that coin doubler became useless as I unlocked everything. It’s not a very long while, just an hour or two total, but some of that time is terribly boring. Perhaps the grind would be a bit better if there were something more to aim for in the meantime.

Each level has three goals, you see. One is to survive until the end, be that 20 seconds, 45 or longer. Another is to defeat a certain number of ninjas. Killing that number is almost (or actually?) impossible without surviving the timer. The opposite also seems to be true. 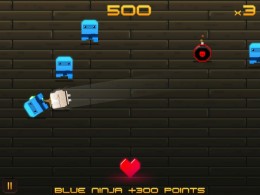 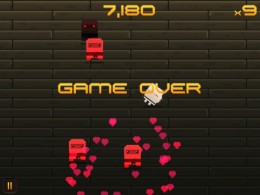 That leaves the third goal of each level, and with it a slightly broader problem with repeating levels for grinding purposes. This goal is to hit a certain high score, one that probably happens to coincide with fighting most or all of the ninjas without breaking your multiplier with a missed tap. If you pull that off, the only way to increase your score further is through picking up coin drops. That’d be luck at work there, and high scores that only rely in luck are not worth much in my books.

All that comes down to a spot of bother: grinding isn’t much fun when you’re doing it for its own sake. If you’ve already completed all the missions, you’ve more or less proven yourself. You’re ready, young one. It’s time to move on. Except you can’t. Eventually you might plateau, however, and then the extra practice will be good.

For me, the first plateau was at Red Belt. The new enemy wasn’t too troublesome, but bombs and flying obstacles developed a habit of always being in the places I wanted to punch. So I’d fail, and my heart would be left unguarded, and I’d swear to do better on the next try. Then I’d fail again.

Eventually that repetition earned me enough to unlock my Brown Belt despite my failings, and then the Black. That’s when things like coins stop mattering entirely and things like high scores are suddenly valuable. The Black Belt isn’t timed. You’ve proven you are an adequate guardian of the heart; now you’re free to go out and achieve the very best you can achieve. Good job, you.

The balance at work in Fist Face Fight is one between challenge and length. It’s further confused by an IAP system that doesn’t take into account the lack of consumable uses. If you can set that aside, however, and rise to the challenge, there is a great lot of fun to be had. Hearts will be broken, ninjas will be punched, and in the end you might knock me right out of the top twenty-five. Be careful. I have a black belt, you see.