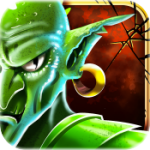 For some reason there isn’t an iOS adaptation of HeroQuest, the adventure board game that informed the childhoods of many folks my age. There are a few that tread similar territory, though, and one of them is Mighty Dungeons, ($1.99) published by Forest Moon Games.

It’s a fairly literal take on board-based dungeon crawling, with tokens for heroes and enemies and tiles to reveal as you explore. You choose a hero from one of a few classic classes—warrior, ranger, mage and the like—then take him out on your choice of a ton of missions. Each one takes you down into a dungeon to smite orcs or skeletons and claim their belongings for your own.

Practically speaking, that means tapping. Lots and lots of tapping. Tap on a tile to move to it, then tap the Attack button to attack over and over on the combat screen. Tap doors to open them, traps to disarm them, and objects to investigate them. Every so often you might want to tap a potion or spell, too.

This might sound a little mindless—and frankly, it is. There are few meaningful decisions to be made in Mighty Dungeons. Do you attack, or do you chug one of your plentiful potions first? Do you explore this room first, or that one? It makes no difference, as you’ll probably clear the map each and every time you take on a quest. 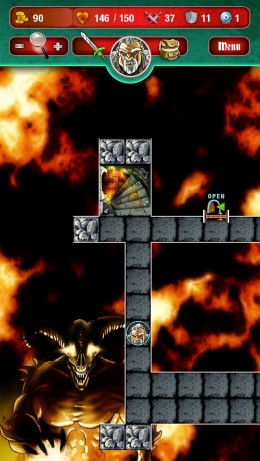 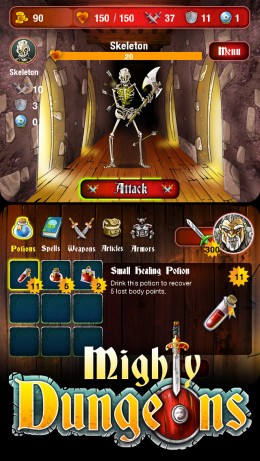 There’s little choice in loot, which sticks mostly two a handful of available items per class, and that’s all that comes from your choice of classes too. Even traps are an empty choice—disarming them carries no risk but the slow whittling away of your hit points, easily solved again with a potion or two.

Leveling is slightly more interesting, as each time you earn an upgrade point you can choose which stat to raise. If only it came up slightly more often. Upgrade points are rewards for (non-Game Center) achievements that are hard won through tons of grinding.

Mighty Dungeons has all the signifiers of an entertaining RPG, but lacks most of the things that could make an RPG fan salivate. The leveling system is creative but hollow and the loot is generic to a fault. These things could be forgiven for a good story, engaging characters or even a particularly impressive combat system, but again—there’s nothing like that here. Just an angry red interface filled with buttons that need tapping.

Still, it has a certain charm amidst all its very rough edges. That mostly comes down to convenience. There may not be many meaningful choices to be had, but progress comes quickly and easily. It’s good for a brief jaunt into fantasy dungeon land whenever you have a few minutes to kill, and you can grind gold and achievements and quest completion for as long as your heart desires. Assuming the rest of the game were reimagined for more meaningful, rewarding play, it’s quite a good start.

Really, the most potential is found in the first moments of creating a character. Before you pick a class or a name, you can select your gaming style. You can choose your hero’s strength, toggle permadeath, adjust the game speed and strengthen the enemy monsters. It speaks to a sandbox sort of play that could be very entertaining for quite a long time—if only that play were a bit more fun.

Mighty Dungeons is hard to recommend in its current state. Keep an eye on our discussion thread, though. The developer is working to add in more dynamic combat already, as well as addressing a few pesky bugs. This is a game that could grow, and it doesn’t need to grow much to be noteworthy. A mobile successor to HeroQuest is an ambitious goal, and would be a great addition to any RPG fan’s library. That just isn’t what this is quite yet.