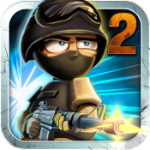 When we checked out Tiny Troopers (Free) last year, there really wasn’t much to critique with the simplified real-time strategy title. With streamlined controls, plenty of action, and a robust weapon and upgrade system, there was in fact a lot to love.

Fortunately, developer Kukouri has elected to not mess with a good thing when it comes to their follow-up release Tiny Troopers 2: Special Ops (Free). Focusing more on refinements of the already established gameplay system, Tiny Troopers 2 offers more of everything we loved about the original and is an excellent sequel.

As you might expect from a direct sequel, Tiny Troopers 2 doesn’t deviate from much the fundamentals of its predecessor. The tap-to-move (and attack) control scheme returns, as well as the special weapons which are aimed by dragging them onto the battlefield.

Command Points and medals – the currencies used to purchased power-ups and upgrade your troopers – are utilized once again in Tiny Troopers 2. The game’s war-centric plot is also strikingly familiar, although there really isn’t much to the narrative other than as a driving force to move between maps accomplishing standard objectives and bonus missions. While objectives may have a little more variety this time around, all are still based around raining fire down on your enemies. 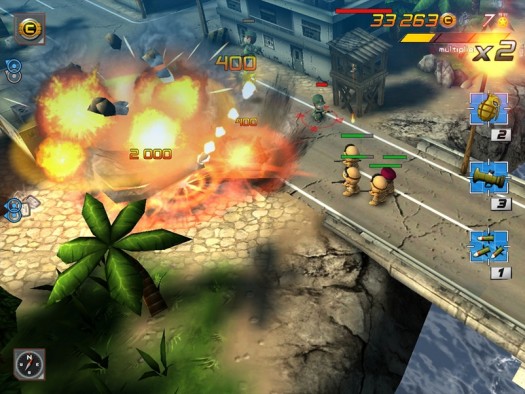 One of the biggest draws of the original Tiny Troopers was its ability to offer an RTS experience while still being highly accessible. Tiny Troopers 2 continues this trend by making large maps with countless enemies easily manageable with enough focus and reactive movement. Enemy encounters are balanced, multiple difficulties ensure folks looking for the challenge of the original can still find it, and there’s enough variety in terms of enemy units, vehicles and buildings to keep things interesting.

Unfortunately the same issues we had with the original (such as the fact that you can’t directly control the movements of your Troopers) still exist, but still remain minor nuisances more than anything else. Also, the fact that the IAP system is entirely optional means folks won’t be frustrated with paywalls.

While the core gameplay remains intact, the small changes made in Tiny Troopers 2 are important and add to the overall experience. For starters, trooper permadeath can now be prevented by using medals to revive fallen warriors at the completion of missions. This allows players to preserve units with high rankings (which affect total hit points) instead of having to start over with lower ranked troopers. Of course, medals are relatively rare, so players will have to balance between using this limited resource for revivals or other improvements. 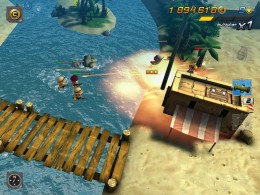 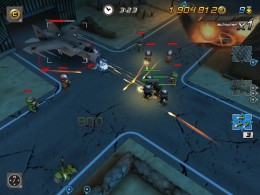 One of the biggest changes in Tiny Troopers 2 is the inclusion of a permanent upgrade system for both weapons and armor. Previously, upgrades were limited to the mission they were spent on. Now, the upgrade system is more of a long-term solution with a better sense of progression.

Armor, meanwhile, is a new money-sink that offers both statistical and visual variations for your units, and Specialists are new supplemental troopers that can be hired for the next mission and come pre-equipped with speical weapons or better guns. These additions aren’t groundbreaking in any sense, but they work well in improving the longevity of Tiny Troopers 2.

Other changes like improved visuals and bigger maps are expected but still important. I especially enjoyed the improvement in map quality as later missions felt a lot more epic in terms of scope and objectives. The inclusion of on-rails vehicle missions is also a nice touch and a refreshing change of pace.

The same goes for the endless zombie missions, which were patched into Tiny Troopers post-launch but are part of the original package in this sequel. Focusing entirely on survival, I loved the change in strategy inherent in these missions, while the fact that command points can be earned and used for campaign missions means these levels are more than just fodder for high score enthusiasts.

When a game is as well received as the original Tiny Troopers, there’s always a discussion regarding how much should be changed in any pending sequels. In terms of Tiny Troopers 2, it’s obvious that Kukouri elected to not change much, and there’s really nothing wrong with that. Tiny Troopers 2 takes everything good with the original and simply adds more along with a few small changes that expand the game while not dramatically changing the formula.

Suffice to say, Tiny Troopers 2 is just as enjoyable as its predecessor and comes highly recommended as a simplified RTS that just gets it done right.