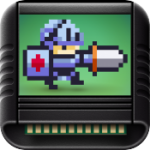 Hello everyone. My name is Eli, and…I can’t say no to the retro aesthetic. Wow! It feels good to get that one off my chest. In all seriousness, though, the resurgence of 8 and 16-bit era visuals on iOS has done a number on my wallet over the past few years, and that’s been somewhat of a double-edged sword.

On one hand, I’ve discovered some fantastic experiences steeped in nostalgia: everything from Velocispider ($2.99) to Mikey Shorts ($1.99). Yet for every gem that’s still on my device, there’s at least three lame ducks that have suckered me in with the power of childhood fan service.

So when I discovered Pixel Licker Games’ Slayin ($0.99) as the result of a friend’s tweet – complete with an icon that looked like a cartridge and an in-game controller skin – I knew I was powerless. The only question that remained was: would it be a wonderful walk down memory lane, or end up collecting virtual dust with all the other deleted duds? 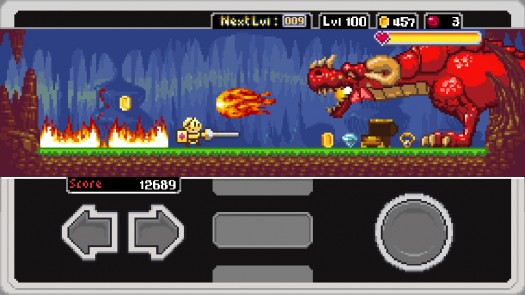 Fellow old-school addicts, rest easy: this is one game that’ll see so much play on your device that you’ll be blowing the dust out of its metaphorical cartridge slot. (Note: blowing on your iPhone or iPad won’t make this or any other game play any better.)

Far from trading in on beloved gaming tropes to make up for poor design, Slayin wraps a classic visual style and theme around a truly original concept that plays to the strengths of mobile. Styled as an “endless action RPG," the game puts you in control of one of three characters – the knight, the mage, or the knave – on a quest to rid the land of innumerable baddies, and take down a series of progressively more epic bosses. The catch? It all happens on one screen, with three buttons.

In Slayin, there’s no need to travel far and wide: the action comes to you. From the moment you start a round, enemies begin filling the screen, piling in from all sides; it’s your job to navigate the chaos with your trusty directional buttons and deftly press the action button to make quick work of the growing hoards. 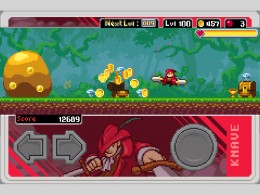 In the case of the knight and knave, this means jumping out of the way and into enemies to let your outstretched sword do its work; the mage is somewhat more nuanced with a tornado attack that grants momentary invincibility and sends all things evil to their graves in one fell swoop. Speaking of which, the more you do some titular slayin’, the more your character levels up, increasing the power and sometimes range of their attacks. Since a hero’s job is never done, either, Slayin functions like a roguelike: as far as you may get and as powerful as you may become in one round, death means choosing a new character and questing all over again.

Beyond just its retro sensibilities, Slayin has something else in common with Mikey Shorts: absolutely top-notch virtual controls. It might seem hard to mess up two directions and one action, but we’ve all seen and experienced the horror stories. Here, each button serves as a great stylistic addition to the game’s aesthetic, but isn’t so fickle or demanding as to result in any missed presses. Moreover, the hit box on each proves wide and forgiving while also mindful of the buttons next to it, allowing you to quickly get into a groove and completely ignore what your hands are doing in favor of tracking and surviving the madness.

Speaking of which, Pixel Licker Games does a stellar job at filtering RPG trappings through the frenetic lens of arcade gameplay. The core principle that drives Slayin is the fact that – wholly unlike an RPG – there’s virtually nothing you’ll have to “learn". Instead of focusing on combat flow, and enemy type, or any sort of macro-level strategy, all the nuance comes from mastering the game’s twitchy challenge.

As a byproduct, the game’s genre influence is used to tickle your nostalgia bone and create a gorgeous micro-world you want to spend time in. And by shifting the focus to judging space, perfecting timing, and balancing patience, the game becomes a kinaesthetic joy: something you’ll find yourself itching to play as soon as you’ve put it down. 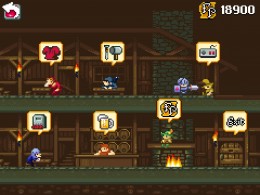 That isn’t to say there isn’t plenty of RPG goodness packed into Slayin. In fact, what makes it so special is the way it distills each feature of the genre down into something bite-sized, while still maintaining that perfect feeling. Each unique character, for example, has a play style and set of upgrades all their own. Personally, I prefer the Knave’s money and point-hungry focus on “luck", with dual blades that you can upgrade to force your enemies to drop better loot more frequently.

Speaking of which, huge points to Pixel Licker for integrating these upgrades right into the flow of play with a shop-keeper that pops up sporadically to let you use your coins in exchange for better gear. With that said, each pixelated hero is worth playing, and the game makes repetition super enticing by borrowing from Jetpack Joyride (Free) to give you a varied set of meta-goals that add purpose to each round.

Part of me hates even having the discussion about in-app payments, because so many reviews are colored by the fact that they even exist at all, without considering whether they’re done well. With Slayin, though, I’m happy to report that the great balance is the only thing worth noting about them. The premium “Fame Points" are earned through play or bought as IAP, and mostly go for unlocking more superfluous things like additional controller overlays and fancy decorations for the tombstone that displays your high score. 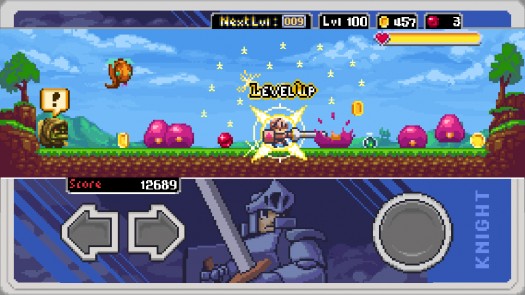 Perhaps you could argue that the game’s bigger rewards – a crazy-hard “Advanced Mode" that starts you at level 50 and an epic “boss rush" mode – take too many Fame Points to unlock, and pressure you to dole out. And that would be a fair argument…if you didn’t enjoy fun. This game is completely tailor-made for “grinding," with its fast-paced play and short round length keeping things satisfying, and every new character and round costs just enough that I always found myself just within reach of affording the next unlock as things started to get a little repetitious. And if you find yourself impatient? You could do worse than toss this team some money.

Also worth noting is that the actual in-game items like armor and better weapons can only be bought with the coins earned during play, so there’s no pay-to-win stuff going on here. Always a good thing for a high-score game.

Slayin may not have done much to quell my hopeless addiction to retro visuals, but it may have done me one better: it’s raised the bar for all games like it.