Straight-up, if you were a fan of Tecmo Bowl, Mutant League Football, or any other zany old-school football game, you’ve got to check out Football Heroes. It’s a throwback to those games of old, except updated with modern RPG, customization, and competitive trimmings. As you play, your players level up and you can acquire increasingly zanier moves. You can also name your own players, teams, and assign colors. It’s a small thing, but as you’ll see in our video, you can get some pretty hilarious results.

You might not get a sense of this in the video, but the feel of the game is fantastic. The movement is fluid and easy and the gestures make sense. Hilariously, this over-the-top football game is the best controlling football game we’ve ever played on iOS.

Football Heroes is due out at some point later this year. We’ll be keeping our eyes on it, for sure. Oh, and here’s that image of the new look (as mentioned in the vid): 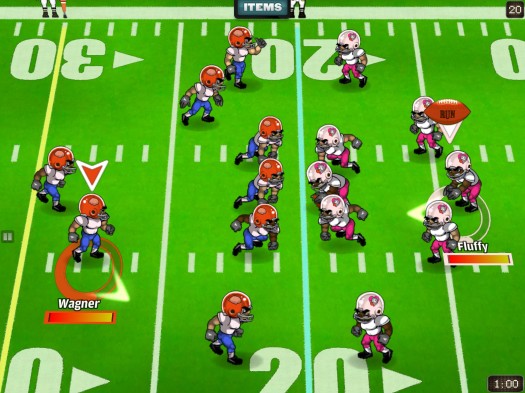