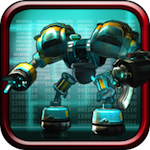 We don’t usually cover kid-focused stuff, but Hakitzu (Free) seems like it’s worth a look, even if you’re only vaguely interested in the “edutainment" phenomenon. In brief, it’s a turn based strategy game that teaches the fundamentals of coding. With an in-game keyboard, users literally type in code against each other, ordering a lumbering mech armed with guns around a map. It’s really cool.

We grabbed some footage it in action at GDC this afternoon, if you’re interested. It’s also available on the App Store now, if you’d like to give it a download.

As you’ll hear in the video, Kuato (yes, it’s a Total Recall reference) plans to keep supporting this through updates. It also plans to move into other subjects.