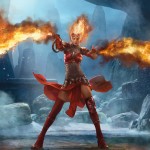 One of the first things I checked out at PAX today was Wizards of the Coast’s Magic 2014. If you like the 2013 iteration of the game, well, you’re in luck as it is mostly the same with very minor tweaks and improvements. The main difference is an all new set of cards, and if the release timing works out how Wizards hopes it will actually have all sorts of new cards before they even see a paper release in the upcoming M14 card set.

I recorded this video using the same setup we use for TA Plays, but because of the ridiculous amounts of noise on the convention center floor the audio is a little crazy. The game is being piloted by a Wizards employee who goes through all the different features of the game. If you just want to see actual gameplay, skip to around the 5:00 minute mark, although keep in mind the game engine is basically the same so there’s not a whole lot that’s new in this video.