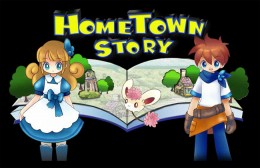 Back at E3 last June, Harvest Moon creator Yasuhiro Wada and publisher Natsume made some waves with the reveal of their joint venture, a game called Project Happiness. Slated to hit at some point this year, Project Happiness tasks you with running a shop in a really small village. Interestingly, it’s more about the people you meet and their stories than it is about hardcore shopkeeper simulation, which sounds like a pretty cool twist.

Today, we’ve got some more news to share on this one: Natsume and Wada have announced that the game’s name is now Hometown Story and it’s totally coming to “mobile" in addition to 3DS in North America.

A new trailer has been released, too, and it kinda shows off the emotional stuff that Wada is trying to pull off with this. It’s definitely interesting.