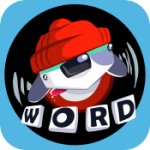 If an awkwardly earnest take on the Fresh Prince of Bel Air theme sounds like a good time to you, you’ll probably dig Sarah Northway’s Word Up Dog (Free). Get it? “Dig"? Because you’ll be digging in the dirt for dog bones and letters…? Just priming you for the endearing dorkiness of Word Up Dog, friends—it’s a fun, original little word game, but you have to love it for the underdog it is.

With slang and character archetypes drawn from the blaxploitation era straight through the worst of the 90s, most of Word Up Dog’s dialog is wince-worthy at best. Consider that the characters speaking it are cats, dogs and lizards living in an underground cavern filled with scattered letter tiles, though: nothing about this game’s premise is well-grounded. Thematically it might need a little help, but mechanically I find I’ve been missing this little exploration word game in my life. 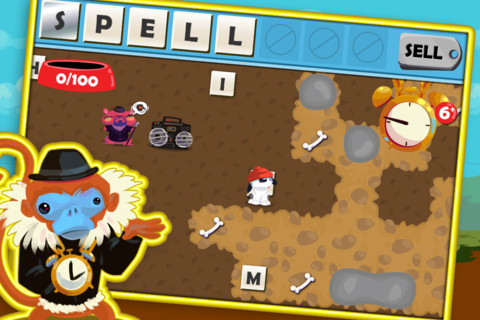 There are two classic games at work here. In one, you dig your way under the ground with limited resources and explore unknown caverns. In the other, you take letter tiles and organize them into the best-scoring words you can. Mixing the two is unorthodox, but it works.

This little doggie runs on bones, and bones are in limited supply—even deep underground. Each tile of dirt your pup digs away costs one bone—each dogbone he finds gives one back. That’s a losing proposition, so it’s a good thing you can use your vocabulary to earn yourself all the bones you need. 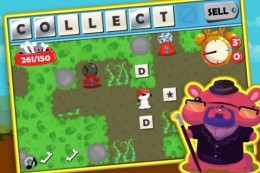 There are letter tiles scattered throughout the caves, waiting to be collected. Once you’ve claimed them you can shuffle them around into words and then sell those words for bones. Whether those words need to be real or not is up to you, since the so-called Hip-Hop dictionary includes slang like LOL while the Queen’s English dictionary doesn’t. Either way, you need to hit a certain quota of bones to reach the next level, and exploring is costly. It could be a struggle, but the game wants to help. It offers constant opportunities to come up with words of certain lengths will certain letters—turn them in on time and you’ll earn big bonuses.

Your hungry pup isn’t alone in this task—there’s a whole cast hiding out in the caves to help him. There’s a monkey that gives out free bones, a lizard that sells performance enhancing drugs out of his car, a cat that works demolitions and a few others. Each one will give you one of whatever he’s selling—the rest cost precious bones.

They rarely prove to be all that necessary, because Word Up Dog isn’t tuned for skilled wordsmiths or experienced explorers. This game needs a harder mode like nothing else. Each of its seven caves has its own thing, like impassible lava, slippery ice, teleporting sandworms and a few other challenges. These add some spice, but rarely much difficulty.

If you can spell your way through all seven levels, you can replay them for higher scores. If you can go far enough over the required bone quota, you can skip levels on later playthroughs—otherwise you have to work your way through from the start. It’s an artificial limit on replayability, since there’s not much to differentiate starting on one level from another.

This all sounds a bit bleak—an awkwardly written word game that never reaches its potential—but for all that, Word Up Dog is lovable. It’s a bit dorky, and it needs a few tweaks to really offer much lasting value, but what’s here is quite fun. It just needs a little more worth digging.