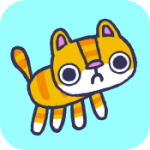 Sir Pussington is my favorite cat—hackycat? He’s just so dapper with his little top hat and monocle, and his mustache gives fellow hackycat Mustachio a run for his kitty treats. Both of them bounce nicely when I kick them, and their little feet paddle the air as they fly.

Hackycat (Free) isn’t kind to these animal denizens. The little kitties just fall to pieces if they touch the ground. It’s up to you to save them, to keep them up and away from that tragic fate as long as you can. Like Hacky Sack, this means a lot of bouncing things off your feet, your knees, or your head. Unlike those more humane games, these things meow piteously when you bounce them. It’s a tough gig, but what are you going to do? Let the little guys explode? 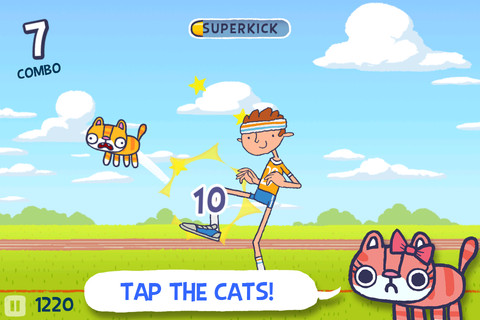 It works because Hackycat takes itself ever so seriously. This is a right proper game of kick-ups, one with a steep climb to insane heights on its leaderboards. You’ll learn to manage three, four, five balls at a time, never blinking, never letting one drop—only the balls are cats and you adopt new ones with cheeseburgers (or tofuburgers) and it’s all completely and utterly silly.

You start with a single cat. It can be bounced up, then bounced over and over without a miss for a combo. A ribbon of cheeseburgers appears, and you bounce your kitty over to collect them. When you collect enough, a target appears. Anything tapped inside that target can be launched right out of the game, never to be seen again. 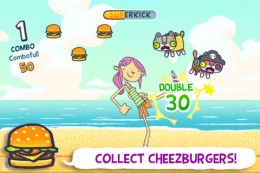 After a bit you find yourself with two cats, and you juggle both the same way. If you can hit both in one tap you’ll get a bonus. Then a third parachutes into the mix. This might be when you start to hope for that superkick target to show up. If not then, your moment of need will come. There are always more cats to kick.

Doesn’t that sound just horrid? But Hackycat makes it work. Perhaps you have a fundamental moral objection to depictions of violence against animals. Otherwise, the game does a fantastic job of alleviating any guilt there is to be had. The cats look disgruntled when you kick them, and positively high when they get cheeseburgers. Each power-up you unlock gets them even higher, until you can be fairly sure they’ll just float away. Even failing, their limbs scatter bloodlessly in little piles of ex-hackycat. It’s all adorable, except the meowing.

Along with high scores, your kitty kick-up adventures are rewarded with cheeseburgers. You can spend them on a whole list of adoptable kittens, each one cuter than the last. Those get cycled in randomly as you play. There’s also a bonus character to unlock, and bonus stages to play in. None of these things makes a significant difference to your high score but they’re all exceptionally desirable. It’s a good carrot, and there’s no stick to be seen.

All that crazy stuff sits on top of a strong foundation, so it’s not like Hackycat is only for fans of the absurd. It’s legitimately challenging to keep the cats all up for any length of time, and it takes skill to corral hits into major combos. Risky moves earn the big points, after all. You also have to be cautious and aware, or you’ll tap the occasional bird that shows up to mess up your groove.