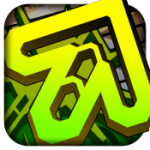 Fans of Dance Dance Revolution have probably been disappointed ever since the previously released Dance Dance Revolution S+ was removed from the App Store some time ago. Well, Konami is back at it with DDR Dance Wars (Free) a new rhythm game that unfortunately doesn’t offer backwards compatibility with the previous title. While Dance Wars obviously does a good job bringing back DDR’s music and style to the App Store, its move to a freemium system for unlocking songs feels forced and is highly disappointing.

Veterans of DDR S+ or any of the countless previous versions of Dance Dance Revolution will feel right at home with the core gameplay of Dance Wars. The same four-direction rhythm scheme returns, complete with a virtual dancepad in the same format as the physical controllers. The standard difficulty and ranking system rounds out the basics, along with its unique brand of music. In this regard, Dance Wars plays like most other rhythm titles on iOS, although I really don’t like the virtual dancepad and think it’s a far cry from being an optimal control scheme. 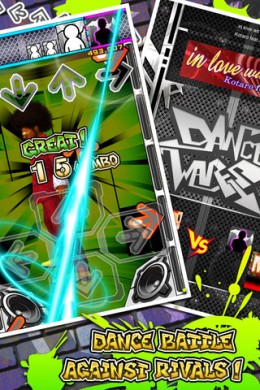 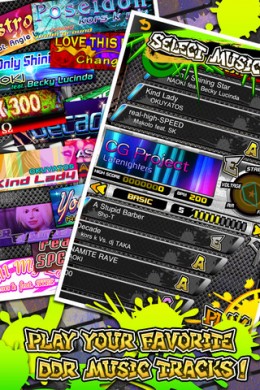 While anyone that’s played DDR will recognize the the layout of the virtual dance pad, in practice it’s a pretty inferior control scheme compared to say, Tap Tap Revolution. For starters the virtual pad is located on the bottom of the screen while notes are slowly moving towards the note line at the top. This means that you need to simultaneously keep track of your finger placement while still trying to pay attention to the appropriate notes as they hit the note line.

This seems like it shouldn’t be a huge deal but I found it to occasionally be a frustrating experience as my hands would drift from the button placement while distracted by the ascending notes. With enough practice, one should be able to overcome this issue, although it’ll still rear its ugly head on harder difficulties. The whole scheme feels like a choice of form over function and in terms of iOS devices there are far better alternatives.

Dance Wars may feel familiar in its controls, but deviates from previous titles in its method of unlocking songs. Each song can be unlocked via completing a number of set missions associated with that song or by engaging in Battle Mode with other players. Mission mode is pretty standard with objectives centered around completing a song with a certain score or ranking in order to complete it.

Battle Mode tasks you with competing with other Dance Wars players, with a win netting you a piece of the sticker. Collect all six, and you unlock the song. Meanwhile, other players will be trying to take stickers from you, and you can set your favorite (and best) song run as your ghost that others will challenge. Players can also join up, form ‘Crews’ and use each other to gain scoring edges against the opponents. So far, the changes in Dance Wars seem pretty interesting and the social interaction is a nice twist. However, this all changes once the freemium comes into play.

Each song played in Mission Mode or Battle Mode consumes ‘stamina.’ While stamina consumption varies between modes, a full stamina bar will last you between 5-7 songs. Once your stamina has been exhausted, you can either wait for it to recover at a rate of full stamina bar in 24 hours (!) or you can consume food items that instantly recover stamina. Food items can occasionally be earned by completing various achievements, but for the most part you’re going to have to shell out for some premium currency in order to purchase them.

Obviously not all freemium systems are equal, but I found Dance Wars system to be particularly unfair. The 24-hour wait time (which averages about being able to play one song every two or three hours) for stamina recovery is absolutely ridiculous. When you add in the fact that you consume stamina regardless of if you win or lose at your respective mission or battle, it makes the system even more onerous. In addition, the premium currency itself is convoluted, as players have to purchase “DDR Coins" within the Gree system which can then be used to purchase the premium items. In fact, the only part of the system that’s friendly is the fact that songs that are unlocked can be played in ‘Free Play,’ allowing you to practice on any difficulty to your heart’s content.

If all Dance Wars did was take the standard DDR gameplay and music selection and infuse it with some social features, I would have happily played it without much complaint. The problem is its excessive freemium system not only prevents you from playing, but blatantly puts monetization ahead of any semblance of balance between unlocking songs and having to pay for IAP items. It’s really a shame and is a far cry from the previous DDR offering. Meanwhile, I’d recommend rhythm fans go back to games like Cytus ($1.99) that get it right.