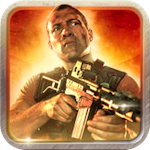 Turns out that dying is a pretty easy (and costly) thing to do in Die Hard (Free), a new tie-in movie game based on the latest Die Hard flick. In brief, it’s a lane-based runner with a rudimentary shooting mechanic and some borderline aggressive IAP functionality. You play as tough guy John McClane’s son (what?) and basically keep him safe as he runs through a bunch of broken down environments. You tap to shoot, swipe vertically to jump, and swipe left or right to move him out of harm’s way.

This isn’t exactly an endless runner, or at least it doesn’t appear to be — there’s a lot of checkpointing, which implies this thing has an end. But, at the same time, using a checkpoint is kind of a pain. You have to pay with two currencies just to use one.

You’ll see what we mean if you dig in below. This isn’t exactly thrilling stuff, but we’re also kinda struggling to think of any film to game adaptation that isn’t named Chronicles of Riddick that hasn’t been meh. So, hey, Die Hard everyone: