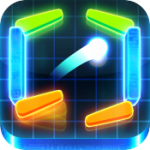 PinWar (Free) isn’t a game for the pinball aficionado. The tables lack the (literal or figurative) bells and whistles of other pinball games, and the physics aren’t right at all. No, PinWar is pinball for the masses. It’s fast, it’s fun and it’s fiercely competitive—assuming there’s another pair of hands nearby to enjoy it with.

Unlike your typical pinball experience, there’s no real scoreboard to dominate. There are Game Center leaderboards, but they’re for things like “Levels Reached" or “Medals Earned." The competition in PinWar is of the playground variety—just you and a friend across the table, duking it out for bragging rights. Or not. PinWar also has its strong points of the single-player variety, they’re just not the ones you might expect.

The game’s biggest surprise is that there’s no way to just sit back and play pinball. Either you battle against a local opponent or a less-than-impressive AI, or you complete single-serve missions on gimmick boards. 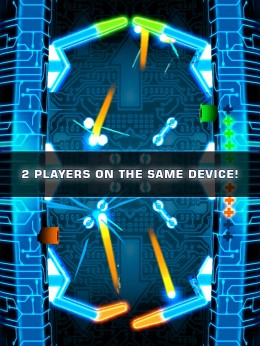 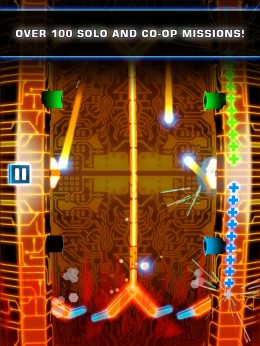 Either way, it all goes down on a modified pinball table that takes a little getting used to. Imagine two tables cut in half and glued together in the middle—the ball ramps up toward the center, then straight back down the other side. Assuming an opponent of any sort, there are flippers on both ends of the table, and the screen is cut into quadrants that each control one flipper (or one set of flippers on more complicated tables).

This setup makes the game’s physics feel extremely uncomfortable at first. You flip a ball up to the midway point of the screen, and gravity seems to reverse. Picturing the whole thing in 3D helps, but it still takes some adjustment. The flipper physics also lack the precision they need for a proper pinball experience. 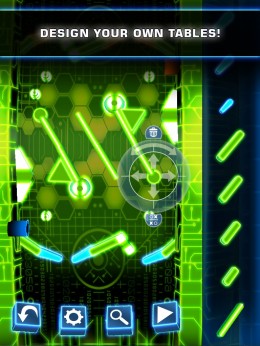 But then PinWar isn’t a proper pinball experience. Its fun is found either hunched over an iPad with a partner, tapping away frantically at the flippers, or deep into Mission mode. Both of those things allow for a little wiggle room in the physics.

Mission mode is pretty cool on its own. It cycles through a ton of different game types and tables, some more successful than others, and adds something of a progression system to the mix. Each round you play gives you a random selection of two game types, so you can stick with the ones you prefer, be it crazy multi-ball challenges, precision shooting, mazes, breakout-style boards, you name it. These diverge quite a bit from the challenges you’d expect from pinball, and demand both skill and occasionally creative thinking.

When you finish a mission you’re awarded Lightning, experience and medals. Earn enough medals and you get a bonus round that gives you a lot more Lightning. Earn enough experience and you level, giving you bonus Lightning. Sense a theme emerging? You can also buy it, but there’s so very little reason to do so. All Lightning does is let you unlock new Battle tables, and you can grind it with zero effort if you’d like.

If the built-in Battle tables aren’t doing it for you, there’s also a surprisingly robust table editor. It has all the bits and bobs you’d need to duplicate any of PinWar’s tables, and sensible options for laying things out symmetrically. It would be a killer feature if there were any way to share the tables, but as with Battle mode itself there’s not much point if you don’t have someone nearby to play with.

PinWar isn’t quite enough of anything. It’s not quite pinball enough to please the pinball purists, and not quite competitive enough to really hook the adversarial among us. It is, however, a lot of fun. That’s reason enough to pull out the iPad with a friend or mess around solo, and it speaks well to the game’s potential.