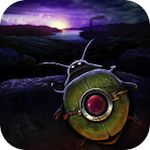 Help Volty ($0.99) is an experiential puzzle game that works in large part because mystery is carefully massaged into every aspect of its core design. From the sound production, to the art, to the mechanics and premise, each constituent part works together to create a lingering sense of wonder that keeps piping you into the next puzzle. It’s a trip, man, and one we’d gladly welcome again — but it’s also one that isn’t without faults, most of which are a direct result of all the secrets Volty constantly throws at you.

It begins with a render of a nighttime scene set deep in some sort of fantasy land — or at least, that’s you’ll gather from the cobblestone tower resting in the background and the crackling campfire in the foreground. Click on the tower and you’ll be transported into a alleyway. A Dark Age bum (or maybe a down-on-his-luck wizard?) is sitting there with a puzzle box and a sack strewn in front of him. There’s a coin in the bag. Take it, you can pump it into the box and start the series of puzzles that define the game. 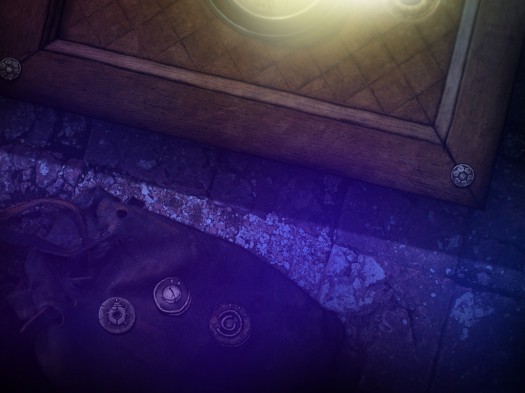 This setup leaves a lot of questions on the table, and the game doesn’t try to answer them. What is this box? Is this dude going to get angry about me stealing his coin? Is he a bum or is he a wizard? Honestly, who hangs out in alleyways at night waiting for strangers to try their puzzle box out anyway? In the meantime, a floaty soundtrack is playfully teasing you to look deeper. And you do, because the mystery is irresistible.

Each puzzle, presented in an over-the-top perspective, tasks you with moving around an electronic bug that can discharge electricity. Puzzles have concrete solutions; most of the time, you need to get the bug (or bugs) to “charge" the box’s wires. When charged, the box pops out a coin that unlocks the next puzzle. 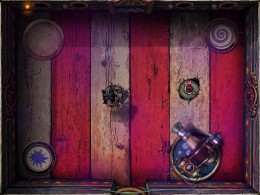 As you play, bugs that you can’t control are introduced, as well as “boss" monsters that can hurt you. In the “late" game, most of the box’s scenarios have you flipping switches and experimenting with various wires to see what they control. Steadily, more clockwork gadgets with weird components are introduced, including tadpoles capable of generating electricity because, reasons.

In a lot of ways, each new puzzle is just as baffling as the box itself. And the new things that are introduced are clever and weird enough to make the journey interesting. Also, the ah-ha moment when you put everything together is pretty satisfying.

At the same time, it’s kinda frustrating to have to learn something almost completely new with every new puzzle. The mechanics don’t stack; what you learned or saw in the last puzzle, in general, won’t be useful in the next.

That’s not to say the puzzles aren’t clever — they are. You just have to view each as its own unique thing. Also, logic isn’t the only tool you’ll need to clear puzzles. You also need some dexterity, as you’ll be tasked with avoiding obstacles and bad bugs as well as guiding several of your own bugs at the same time via multi-touch.

Anyway, Help Volty is a strange game set in a strange world, for sure, but that’s the best part; you can’t figure it out and you can’t help but want to continue because you want to try. It’s neat.