Nineties-era 16-bit gamers who spent time in front of an Atari ST or Amiga might recall a rather unique and atmospheric first-person 3D game with an ominous premise. Archipelagos places you hovering above a chain of islands, once inhabited by a mysterious race known as the Ancients. Long dead at the hands of the Visitors, another race of their own creation, the Ancients’ blood soaked into the land, poisoning it and bringing forth the twisted, writhing trees that crawl across the islands. And, standing as evidence of the dominion of the Visitors is a lone monolith and the smaller stones spread about the landscape from which it draws power to keep the Ancients at bay.

Archipelagos is a strategy puzzle game developed by Paul Carruthers of Astral Software and released in 1989 to critical acclaim, receiving an 84% rating in Amiga/ST Format, and a 92% from The One magazine. Original developer Carruthers, who also created Mortal Kombat, Batman Forever, and T2: The Arcade Game for the Sega Genesis, has just released a remake of his 1989 classic, Archipelagos ($1.99), here 24 years later, for iOS (Universal) as well as the BlackBerry Playbook / 10 (with an Android version on the way) under the Anthill Games label. 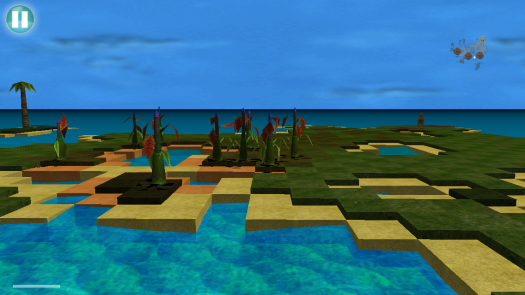 The objective of the game is to cleanse the series of islands — or archipelagos — of all traces of the Visitors. This is done by destroying the lone obelisk located somewhere on the archipelago that makes up each level. In order to do so, you must first shatter all of the stones spread about the islands. This is made difficult by the twisted, ever-expanding growth of trees that spread the deadly blood of the ancients across the land. Energy collected from pearl-like pods that pepper the landscape can be used to cleanse the poisoned land and also to bridge one island to another. Bridging islands together is crucial, because only when there is a solid land-link between a stone and the lone obelisk can said stone be destroyed. Unfortunately, Necromancers (ghosts of the Ancients) appear early on and skirt the shore of each island, slowly taking away blocks of land, making the task of maintaining the land-links a major challenge of the game. Add to this the deadly whirlwinds (lost souls) that randomly appear dancing across the landscape, the blood eggs that hatch with a flash of lightning to poison whole islands at a time, and the timed race to get back to the obelisk once the last stone has been shattered, and you have a challenging strategy experience that, at times, verges into the frantic.

A big part of the experience of the original Archipelagos was the thick atmosphere that it conveyed. The sparse and mysterious landscape of islands and ocean, largely alien, that stretched off into the distance, combined with the eerie accompanying audio track created by famed video game composer David Whittaker, made for a truly eldritch experience. (Apparently, way back when, Carruthers delivered Archipelagos to Whittaker and after a time — with no back and forth whatsoever — Whittaker delivered back to him what is surely one of the most perfectly matched soundtracks of any game out there.) Happily the remake of the game directly features the Amiga soundtrack, but brings with it a graphical overhaul (visually similar to Anthill’s Archipelagos 2000 Windows release) that helps deliver the feel of a more modern (if not lavish) indie title, as opposed to a strictly retro experience. (See gameplay of the Amiga original.)

Instead of clicking about with a mouse, touch and swipe controls are employed. The new control system allows you to zip about the island chains nicely faster than in the original, but can be prone to allowing a fat-fingered “tap-to-move-there" when you meant to “swipe-to-look." Another adjustment from the original release is the level count; the remake delivers 100 levels to cleanse, while the original release placed a whopping 9,999 (mostly procedurally generated) levels between you and victory. Carruthers indicates the 100 levels included in the remake are the handcrafted ones from the original release, and that hundreds more procedurally generated levels will come in some fashion, down the road. Speaking of the levels, it’s worth noting that the very early levels, in both the remake and the original, are quite simple, to get you in the swing of things. From there, difficulty ramps notably.

It’s been many years since I played the original Archipelagos with any frequency but, recalling my overall experience getting into the game way back when, I can say that the remake feels more approachable. The pacing and visualization of the bizarre game world make the experience more deeply immersive, better realized. Archipelagos’ unique combination of strategy with an element of encroaching menace should have similar appeal to a certain set today as it did back in 1989.