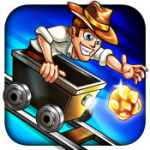 Earlier this afternoon, Jared and I spent some time with Rail Rush (Free). It’s another endless runner. In the game, you control a mine cart and are tasked with collecting gold nuggets and avoiding various obstacles, including broken rails and oddly placed signage. As with most runners, the point of the game is just to go as far as you can. The farther you go, the higher your score.

You might remember this one. It came out earlier in 2012, but it’s just now enjoying a big-time bump on the App Store charts.

As we’ve said before, Rail Rush a solid game for what it is. And, there’s something to its style of running. It feels different, which is a nice thing in a genre that’s as clotted as the runner is. Check it out: