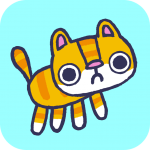 With iOS gaming sometimes just a single, simple idea makes for the best experience on a mobile touchscreen device. The idea behind the upcoming Hackycat sounds about as simple as they come: tap an ever-increasing number of falling cats in order to keep them all airborne, hackysack style, and if even one cat touches the ground it’s game over.

That might sound TOO simple for some, and I can’t blame you, but what’s really sticking out to me about Hackycat is its aesthetic and collection aspects. The developer is Ken Wong, who was art director for such visually striking games as American McGee’s Grimm and Alice: Madness Returns. Hackycat exudes its own whimsical art style, along with more than two dozen unique kitties to unlock and collect. There’s also additional athletes, like the wolfman in the trailer below, along with different power-up items, special abilities and different environments for you to get your kitty-kicking on in.

Whoa, was that a Juno-era Michael Cera in that trailer? Anyway, Hackycat is looking pretty sharp, and although there’s no set release date just yet it’s said to be “coming soon." It’ll come equipped with Universal iPad support, widescreen support for iPhone 5, Retina Display visuals, and Game Center integration. If you have a hankering for some cat juggling we’ll be sure to let you know when Hackycat hits the App Store.