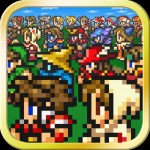 So, Final Fantasy: All the Bravest is indeed an actual video game, and it’ll hit tonight as international releases continue to worm their way across the globe. In brief, it’s a frantic, distilled, and “mobilized" take on the series that eschews pillars like exploration and dungeon crawling and even dialogue in favor of focusing purely on the series’ combat and equipment mechanics and systems.

In the game, you can control up to 30 different classical Final Fantasy heroes across series of fights against classical villains. To attack, you tap on a character or, as we’ve discovered, just swipe up and down on the screen to activate all of them. After each attack, characters are smacked with a cool down timer, which keeps them from being able to attack for a few seconds.

Every enemy kills with one hit, regardless if it’s just a basic Final Fantasy goblin or one of the horseman of the apocalypse. In addition to being flimsy, heroes are one note: they attack, that’s it. You can’t activate special skills, you can’t target enemies, and they can’t buff each other.

Boil it down, and the strategy revolves around raw numbers. The design reflects that. As you level up, you gain the ability to take more characters into battle. When you find a weapon, it’s magically auto-equipped to every character of that can use it. Also, you can recruit new hero types on a regular basis, expanding your roster.

There’s an emphasis on speed, too. Get slack with attacks, and enemies will shred you. A weird method we’ve been using is a constant circular swipe, as it’ll activate every hero as soon as his or her timer refills. Pushing the bar further, every three hours you’ll be able to activate a “Fever" attack that nukes your cool downs and lets you go nuts for a short, but effective, length of time.

If you haven’t caught on, this definitely isn’t the Final Fantasy you know, but there’s a lot of the series’ touches present. The presentation is old-school Final Fantasy. The enemies and heroes are, too. The simple “save the world" narrative hooks are all present and accounted for, as well as the late title card.

There’s some mobile sensibility thrown in for good measure. When a character goes down, a cool down for a replacement starts. At any point, even if you lose your entire party, you can use an hourglass to replace every member. You can buy these in packs of three, if you’re into that sort of thing. Also, you can buy classic named heroes via IAP and buy new arenas set in places from old games. Final Fantasy 7‘s Midgar is one, for example.

Watch the video to see if it clicks. We’re still kinda chewing on ATB as a whole, so we don’t have a firm opinion on if it’s good or not and why. But we do think the game is an interesting one, especially if you’ve been riding on the Final Fantasy train since the start. There’s a lot of like here.