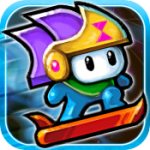 There’s no denying Kumobius’s Time Surfer ($0.99) owes a lot to Tiny Wings ($1.99). It has the same swoopy hills, the same leap-and-glide movement, and the same joy of flight. After that, things go a bit off the proverbial rails.

If the ’80s exploded all over Tiny Wings, we’d be part way there. Time Surfer is a glorious mess of bright colors, pixel art and the most upbeat of chiptunes. It’s more than that, though. Take the calm simplicity of Tiny Wings, crank up the speed, stick it in space and add a dozen good ways to die. Not so calm, but death is just a state of mind: you can turn it around with the rewind button.

The rewind button is key to the whole Time Surfer experience—you’d only be half a time surfer without it. As you surf you collect gems; these add to a pool you can use for a bit of quick time travel. You can only head back a few seconds, even at full power, but that’s often enough to save yourself from death or a bad jump. 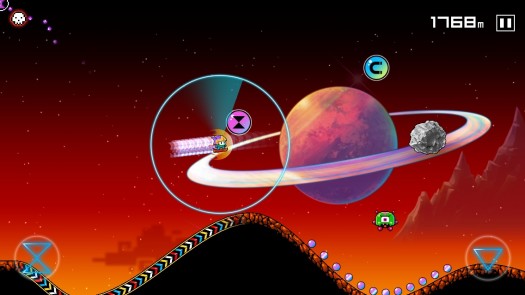 The advantage is necessary, because Time Surfer is pretty unforgiving. Not only are there pits and spikes out to straight-up kill you—the end of the universe is on your tail. If you start flubbing your jumps and losing speed the end will catch up to you. It can be difficult to tell exactly how far ahead of it you’re running, a hassle when compared to Tiny Wings‘ cut-and-dry night cycle, but you can always rest assured that if you’re not doing your best then death won’t be far off.

If it’s taking too long, you can take the alternative of swiping through the main screen until you find Hell Mode. Feel like you don’t see the cute “Death by spikes" graphic often enough? This is where you’ll get over that. Hell Mode does away with the scattered pits and instead has spikes everywhere. Everywhere. It’s horrifying.

On the rest of the replayability front, missions abound, as do unlockables. Time Surfer gives you cake—you collect it while you play, and earn it whenever you complete a mission. It’s used to pay for a collection of fantastic cosmetic options (I’m saving up for the “police box" skin). That’d keep it utterly lacking in controversy but for the pet system. 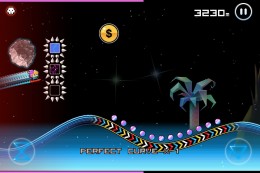 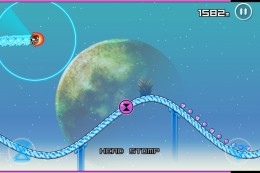 I’m a sucker for pets, and Time Surfer has such cute ones to share. One unlocks whenever you complete a batch of missions, and each has a more impressive ability than the last. From boosting your speed to plucking you out of a pit, these pets prove their worth again and again—it’s just that you have to pay for their services each and every time by feeding them some of your hard-earned cake. None of the pets make or break the game, but it does all feel a touch mercenary. At least I can afford to keep my little buddy the Axolotl along with me every time. I’ve wanted to hang out with that dude since Bean’s Quest ($2.99).

Let’s get back to this Tiny Wings thing for a second, though. Time Surfer is far beyond being a lazy retread. The basic mechanical action is the same—touch the screen to pull in tight and gain speed, release to fly— as is the goal. Otherwise, it feels strikingly different to play. Time Surfer is fast, stressful, and intense. These are not words that one would use to describe Tiny Wings. There is no analog to skipping over planets, aliens and asteroids, picking up more and more speed and then launching yourself off the next jump to keep the chain going.

On the flip side, this game has nothing to compare to Tiny Wing’s most excellent sensation of soaring. Fly high enough and you’ll squish up at the top of the screen for a while. It’s uncomfortably confining. Similarly, some of the areas you’ll pass through in a run of Time Surfer are choppy, full of short little jumps that are absolute momentum-killers if you don’t play perfectly. It’s not always a rush of glorious speed. When it is, it’s intoxicating.

Before playing Time Surfer, I was a little bummed out that Kumobius was making something in the vein of someone else’s classic. That feeling is gone. I get something new and different from playing Time Surfer, a rush that proves there was untapped potential in the formula. The game is vicious, it’s ridiculous, and it looks like something that came off a Lisa Frank Trapper Keeper. Execution is half the battle, and Time Surfer nails it.