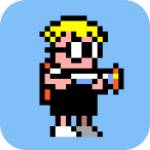 Platforming games can be a finicky genre on iOS. It almost always comes down to the controls. I’ve played otherwise great games that were marred by terrible virtual controls, and on the flip side I’ve played some platformers that controlled beautifully but were bland and boring. To really shine, a platformer has to nail both the controls and the design to a high degree, and that’s exactly what Renegade Kid‘s Mutant Mudds ($4.99) has accomplished.

The premise in Mutant Mudds is simple: brown, globulous, muddy aliens named Mudds have invaded Earth, and they’ve totally disrupted main character Max’s day of watching TV with his grannie. Not cool, Mudds, not cool. Max isn’t going to take this slighting lying down though, so he sets out to dispatch the alien menace using his trusty water cannon and a cool jetpack that allows him to briefly hover around. I wish I had one of those when I was a kid. 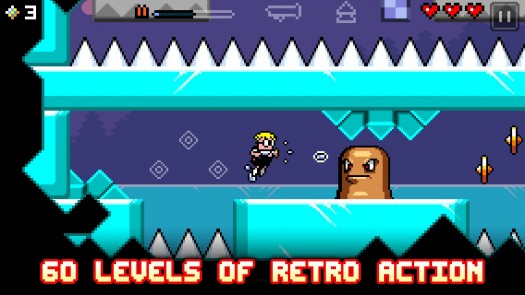 Controls are your standard set of virtual buttons, but they work exceedingly well for such a demanding game. Mutant Mudds was originally designed for the Nintendo 3DS and its physical controls, after all, but if you’re comfortable with other iOS virtual button setups then you should be just fine with these as they really are nice and responsive.

As you probably expected, Max’s main moves consist of running, jumping, and shooting enemies. But you can also press the jump button at any time while Max is in mid-air to hover for a short period, and while you’re hovering you can press the button again to cut the hovering short and drop immediately down. That last part is key, as many elements of the levels require pinpoint timing to accomplish things like landing on an especially tiny platform or making your way across magically disappearing and reappearing platforms, and being able to control the length of your hover comes in handy. 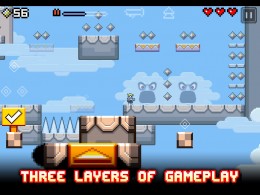 With just a bit of practice, the hovering becomes second nature, and I surprised myself many times with how I was able to make it through particularly demanding sections of a level almost without even thinking about it. Mutant Mudds is a game built around precise timing and patience. It’s a much slower-paced platformer than what you usually see on the App Store, but it’s more about execution and dexterity than it is about speedrunning or fast action.

One of the defining features of Mutant Mudds is the ability to leap in and out of the foreground and background of each level. Certain platforms or enemies will whisk Max between the three different planes in the game, and the levels have been cleverly designed around this. It doesn’t fundamentally change how you play, but it’s a cool effect that will occasionally tie into the puzzle-like nature of the levels, as at times you’ll need to discover just which plane to be on to reach a certain item or goal.

There are 60 total levels in Mutant Mudds, with 20 main levels that offer three goals each to achieve (well, four really, but more on that in a bit). The first goal is simply completing the level, which can be a challenge in and of itself. The second is collecting all of the 100 diamonds that are spread throughout. Finally, every level has a hidden entrance to an additional level with an alternate endpoint. These hidden levels are generally a good deal more challenging than the main levels, and almost all of them require you to use upgraded equipment to even be able to reach their entrances. 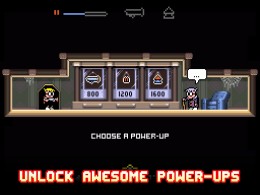 The way you upgrade your 3 abilities is by collecting the 100 diamond badges for each level. The upgraded water cannon shoots farther, does more damage to enemies, and can blast away special walls that oftentimes are blocking the entrance to a hidden level. Then your jetpack can be upgraded to allow you to hover for longer, also essential in getting to some hidden areas. Finally, you can gain the ability to blast yourself vertically in mid-air, which, unsurprisingly, is also essential to reaching previously unreachable parts of a level. Max can only equip one upgraded item at a time, so you’ll have to determine which will benefit you the most or which one is required for a certain part of the game.

The main goals for each level, the hidden levels, and the ability to go back and discover previously out of reach areas using upgraded abilities make Mutant Mudds pleasantly replayable without making it feel like you’re arbitrarily going through previous levels just for the sake of extending the length of the game. It’s just the tiniest dash of Metroidvania, and it works really well here.

Also worth mentioning is that Mutant Mudds is a very nice looking game. Developer Renegade Kid jokingly refers to it as a “12-bit" platformer, something in-between the 8- and 16-bit eras visually, and I think he nailed it. It’s colorful and full of personality despite its blocky, retro-inspired aesthetic, and it’s nice and sharp on Retina devices. It also features some of the catchiest chiptunes I’ve heard this side of DuckTales on the NES, which is really high praise if you know how much I love the music in DuckTales. 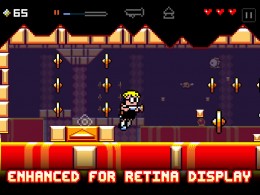 There really isn’t anything I don’t like about Mutant Mudds, it’s been one of my favorite platformers I’ve played on iOS, but let me make one thing clear: this game is hard. Brutally hard, even. You’re going to die a lot and need to retry many times to pass certain parts of a level. Get used to it. Some people will revel in this challenge, and some will throw their hands up in frustration. However, if you stick with it, there’s no greater satisfaction than passing some of the harder parts in Mutant Mudds. The virtual buttons don’t make the challenge any easier, but they don’t really get in the way either. Being able to “save" yourself from an errant jump here or there by hovering certainly helps, too.

As I alluded to earlier, there is a fourth goal for each level in Mutant Mudds but it requires getting all of the previous goals first. Once you do you’ll unlock Grannie as a playable character, and she has the unique ability of being able to use all of the upgraded equipment at the same time. This allows her to reach a second hidden level within each regular level, and this is where the challenge gets even crazier. These levels are meant for experts, but if you even make it far enough so as to gain access to these additional levels it means you should be primed and ready to take them head on.

Personally, I welcome this kind of challenge, and I imagine many others will enjoy it too. The name of the game really is patience in Mutant Mudds, and often the best tactic is to sit and wait for the most opportune time to pass a particularly fiendish section of enemies and challenges rather than make a hasty decision. If you’re feeling competitive though, every level is timed and has associated Game Center leaderboards to track your top runs against other players worldwide.

Mutant Mudds really has it all, and in terms of the slower-paced, exploration-based platforming games it’s unmatched by anything else on the App Store. With all the regular levels, the hidden levels, and the super secret expert Grannie levels, Mutant Mudds should keep you plenty busy for a good long while. The fact that it’s available for a fraction of the price than that of the 3DS or PC version is a huge bonus as well.

Players have been really digging the game in our forums since it came out in early December, so for a new platforming experience that’s challenging, lengthy, and inventive, Mutant Mudds is an easy recommendation.