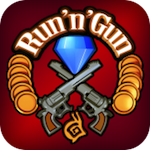 Earlier this morning, Jared and I spent some time with Run N’ Gun (Free). It’s another endless runner that doesn’t do to much to break the mold. In the game, you’ll be tasked with the usual: running as far as you can while sliding, jumping, and tilting your way past weird obstacles. It’s most notable mechanic is the shooting. During runs, you can shoot little goblin dudes that spit out steady streams of coins.

This is a free-to-play game, so it has a couple of systems that work together to keep you invested in the game’s economy. Notably, there’s several characters you can buy with the game’s control currency.

If you’re into endless runners, chances are you’ll dig this. But it’s so similar to the other games out there, you might burn out quick. Check it out: