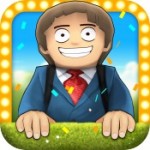 About twelve years ago, I went through a phase where I was convinced that blood sport would be the next evolution of American entertainment. This was around the time Survivor hit, and I was watching videos of a lot of very unsettling Japanese game shows. Then reality TV took a sharp left turn into the land of American Idol and The Bachelor, and my fears (hopes?) were allayed.

Man in a Maze ($0.99) is pretty much what I envisioned in those cynical days of my youth: one man, trapped in a maze filled with killer robots, electrified floors and other completely insane things, competing for prizes that wouldn’t feel out of place on the The Price is Right. A nice little crystallization of everything that’s wrong with mass-media and its obsession with pain and suffering, right here in the middle of a clever game of hide-and-go-seek with death robots.

The contestant of the day is Chuck, an eternally cheerful fellow always ready to throw himself into danger for a nice set of steak knives. The circumstances are almost laughably stacked against him. One man versus the most sadistic set-ups a gameshow host could plan with only a tennis ball to save him. 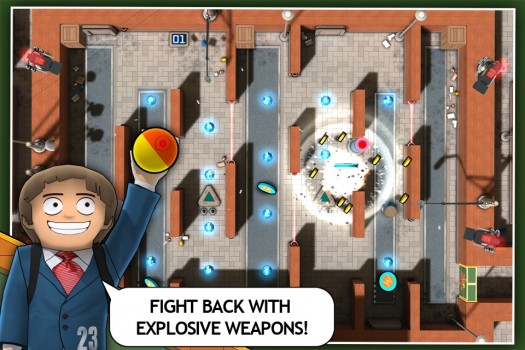 Yeah, that’s right. You traipse around mazes filled with seeker bots and gunners and all sorts of devious traps, and the only things you have to defend yourself is a neon-yellow bouncy piece of sports equipment that can occasionally be hyper-charged to deadly effect. That’s the struggle that drives the game: flee the robots, arm up, and take ’em out.

Arming yourself is a process. There is a path of gems to take, and when you’ve collected them all you’re granted the opportunity to fight back. A few more and you can escape. Until then it’s ducking and sneaking around, desperately hoping you can survive and maybe—just maybe—drop your robotic tail into a trap or lose it behind a few walls.

The aim of this struggle is to compete for a series of atrociously, hilariously mundane Smash TV-level prizes, but the meta-goal is to collect coins and tokens. Tokens give you chances to get more coins, coins give you the ability to collect and upgrade a small collection of power-ups. There is a coin ship, easily ignored, if you need a quick leg up on your upgrades. If, say, you want to be able to drop more mines in the path of the robots or freeze them in their tracks, coins will come in handy.

But Man in a Maze doesn’t need power-ups to be fun. It’s a tense game of stealth and sabotage, dressed up in cynical clothing. The only serious problem it faces is the issue of controls: no matter which method you use, they’re likely to get in the way at times. There are options, but if you’re playing on a small device it can get hairy.

Otherwise it’s grand. Throwing Chuck into danger is a great pastime, even if we’re the ones that suffer when he fails. As the game deepens in difficulty, there’s a real satisfaction to be found in slipping around the opposition, taking them out when they’re not looking. And hey, there’s always the promise of great prizes to be had. Like a lovely digital picture frame. That’s worth putting your life on the line, right?