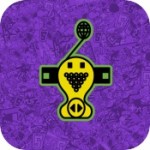 There are so many things to love about Sega’s classic Jet Set Radio. Back when the game debuted on the Dreamcast in 2000, it set the gold standard for visuals, music (courtesy of Hideki Naganuma) and pure style, creating a game that simply hadn’t been seen before. The iOS port of Jet Set Radio ($2.99), in some ways, takes that original experience and makes it even better with high-def visuals and a much faster framerate. Unfortunately, like a lot of ports before it, Jet Set Radio’s virtual controls leave a lot to be desired, especially when you take into consideration the natural difficulty curve of the game.

If you’re one of the few that have never played (or heard) of Jet Set Radio, this is a game about turf wars within the city of Tokyo-to. You take control of a skater gang known as The GGs as they battle rival gangs to take control of the town. Battles take place via missions that span three different parts of the city, with the goal of most missions being to spay the graffiti of your gang over any rival gang marks. While that sounds simple enough, tags can and will be found in areas requiring precise platform skills. In addition, rival gangs, as well as the Tokyo-to police force will always be gunning for you. Finally, a perpetual timer exists in most missions, keeping you on task. Jet Set Radio is a perfect example of a game with a great balance between platforming, action, and exploration. 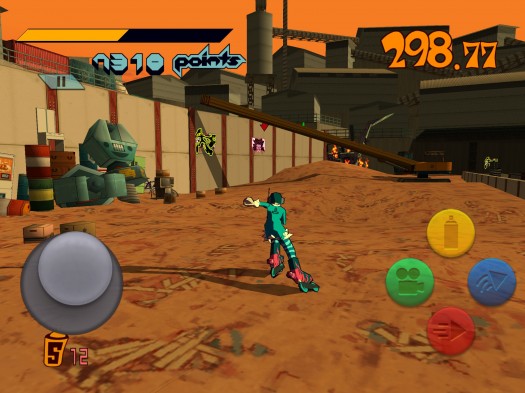 For veterans of the game, the iOS port doesn’t offer much in terms of additional gameplay features, with online leaderboards and Game Center achievements being the most significant of extras. Otherwise, you can expect the same missions and Professor K-narrated story as the original. However, that’s not to say that everything is exactly the same, as this iOS port has a few tricks up its sleeve in regards to the visuals.

When Jet Set Radio originally hit the scene, one of the areas that garnered acclaim was its use of cel-shaded graphics. On iOS, those graphics have been upgraded to HD-quality visuals that look absolutely amazing. Sure, you’re still going to notice that the game is obviously dated, but fans of the game will easily see that this is the nicest looking version of Jet Set Radio around (especially on current iOS hardware). 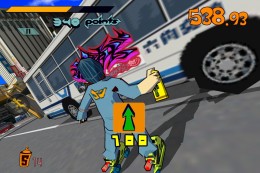 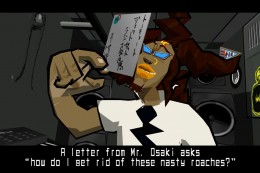 Another nice surprise is the accompanying boost in framerate. In fact, it’s pretty amazing just how smooth Jet Set Radio runs. It gives the whole experience a more fast-paced arcade-like feel, which makes the game simply feel better. The included soundtrack also sounds crystal-clear and adds to the impression that this port offers a higher-quality experience than the original. This feeling runs through the entirety of the game, until you get to the controls.

Like many console ports before it, Jet Set Radio employs a virtual controls scheme that consists of a virtual circle-pad for movement, and four buttons for the various actions that can be performed in the game. Some areas, such as menu selection and the graffiti editor, use strange control schemes that are unintuitive and feel off. However, in-game the controls are responsive and handle about as well as as a virtual controller scheme can handle. Unfortunately, for a game like Jet Set Radio, that’s not good enough. 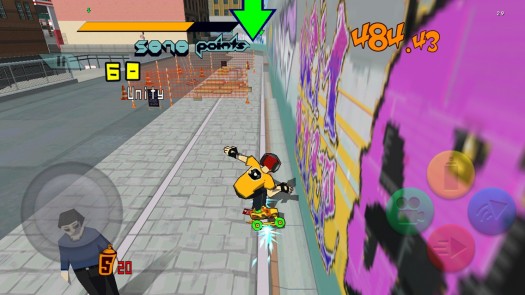 Being a fast-paced arcade platformer, Jet Set Radio tasks you with having to perform some pretty complicated moves. While such skills can be occasionally bypassed in some missions, others, such as the recruitment levels, make it mandatory. These situations are where the controls falter, turning the game into an exceedingly frustrating experience. In this regard, the souped-up framerate also works against the game, as it requires a level of precision that the controls simply can’t deliver. While experienced veterans could probably adapt to the virtual controls enough to “get by" it’s hard for me to imagine any newcomers with enough patience to succeed.

In the end, despite the nice improvements to the visuals, Jet Set Radio seems relegated to that pile of console ports that lose something due to the controls. True, the game is undoubtedly playable, but no where near as playable as it would be with an actual controller. Still, as with other ports there’s a lot of merit to checking out Jet Set Radio, especially since the non-controls parts of the game are vastly improved. There’s also the fact that you can now play Jet Set Radio on your freakin’ phone.