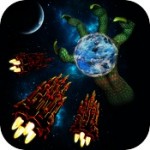 The first time I played Choice of Games’ The Fleet ($3.99), the hideous Tribbles succeeded in their conquest of Altair 4. The second time, my homeworld, Earth 2, wound up in the horrid reptilian clutches of the Republicans. It was only on my third try that I liberated Duroon from the Kargham (I went with default names that time.)

The Fleet is Choice of Games’ latest iOS gamebook, and at a glance, looks similar to their recent sci-fi release, Choice of the Star Captain ($3.99). After all, both feature space ships and megalomanical aliens. The style, however, couldn’t be more different. Choice of the Star Captain is farcical, somewhere in the cosmology of Red Dwarf, Bill the Galactic Hero and the Space Quest games.

Don’t let my Tribbles and Republicans confuse you: The Fleet is a serious game, more in the genre of Babylon 5, the Mass Effect series, and particularly Battlestar Galactica than anything Douglas Adams-inspired. You command a fleet, and spend part of the game escorting civilian vessels under difficult circumstances that force you to weigh their needs against those of military preparedness. 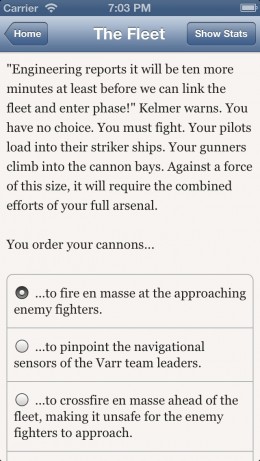 While that tension is distinctly reminiscent of the conflict between Admiral Adama and President Roselin, and may be the strongest part of the game, The Fleet is not a wannabe Galactica licensee. The plot of The Fleet turns on alliance-building and a politically complex universe in which the enemy is neither superhuman nor inherently evil, and the game is better for it.

I was a bit surprised not to see some of the customization options typical in Choice of Games’ releases: there are no dialogues for the protagonist’s name, sex, or sexual orientation. The reason becomes clear if you pay attention while playing the game: your avatar’s gender is indeterminate, irrelevant to the plot and so never addressed. The dialogue flows naturally, and the character’s authority as Fleet Captain is derived solely from the player’s decisions (as it should be).

That’s part of the similarity to the Mass Effect series, where FemShep never has people second-guess her because of her sex. The other similarity is that both games feature a colorful cast of fractious space aliens. The difference, as should be obvious by this point, is that there’s no sex in The Fleet. If seducing your crew is a core component of sci-fi gaming for you, you may need to turn elsewhere.

Otherwise, The Fleet offers a compelling interactive story where the elements of simulation, while very simple, feel meaningful. The possibility of playing through the entire game only to come a cropper at the end was a risky call, but it makes your decisions feel more cumulative and consequential, and enhances the replayability of the game.

Among Choice of Games‘ offerings, The Fleet is neither the longest nor the most original in it’s premise, but it does a very good job with the story it wants to tell, and with the integration of system and story. If anything, I’m left wanting more… and there is more. I doubt I’ll unlock all of The Fleet’s endings, and I’m fairly certain I know everything about the Grix that the game has to tell me, but I’m not done with this one, not yet.