Interest in the retro gaming scene has really expanded in the last few years, thanks in no small part to the proliferation of capable mobile devices such as the iPhone and iPad and the App Store behind them. As such, retro-minded iOS gamers have a wide range of games to choose from, such as retro-inspired new releases, retro remakes, as well as the actual games of olde brough forth through faithful emulation. It is in the last arena that, early this year, Rantmedia Games decided to toss its hat, sharing word of their upcoming Vectrex Regeneration, a one-stop-shop for fans of the much vaunted, early ’80s Vectrex console.

We have been following Rantmedia’s progress closely since then, and are pleased to have finally had an opportunity to put their Vectrex emulation / game library through its paces. Vectrex Regeneration (Free), a universal app for the iPad (2 and up) and iPhone (4 and up), is now live in the App Store, and here’s the low-down. 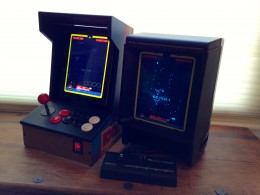 First, some needed history. Released in late 1982 by General Consumer Electric (GCE), the Vectrex is a highly unique game system. Unlike every other console of the time, the Vectrex features an integrated CRT display — but not of the standard, horizontal-scan variety. The Vectrex utilizes a vector monitor, which is similar to an oscilloscope and draws its graphics on the screen in a fashion similar to the display process of a laser light show. It’s the only console from gaming’s past defined by a complete lack of jaggies.

The Vectrex features a wired controller with an analog stick (one of the first ever brought to market) and accepts games on ROM cartridges, though a single, Asteroids-like game called MineStorm is built into the system. Each game title came with a pack-in plastic screen overlay to add cabinet bling and simulate color on the built-in monochrome display. There was even a light pen and an optional 3D imaging peripheral available for the system, the first ever offered for a console.

Thanks to the video game crash of 1983, brought on by hundreds of extremely low-quality games being poured into the market, the production of the Vectrex was terminated in 1984, leaving the system with just 28 released games in all. Due to its relatively short market run and unique system configuration and game library, the Vectrex is, today, a console prized by many retro gaming collectors. Here ends the history lesson. 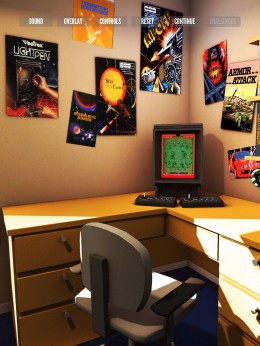 At startup, the app drops you into an exquisitely detailed ’80s kid’s bedroom (some of you may have seen it before…). You can pan about the 3D-rendered room, moving from item to item. Most importantly, on the desk is your Vectrex. Over there on the wall are your game shelves. And over the bed, there, is your leader(chalk)board, and right over there is the achievement corkboard, next to the media shelf, with photos from early app production and videotapes of Vectrex TV ads that can be played on the VCR over in the corner.

After pulling a 3D-rendered game box from your shelf (instructions are there if you’d care for a glance), you can send it to the Vectrex on the desk for a quick play. In that virtual Vectrex runs a Vectrex emulator that renders the games to your iOS screen. And, fortunately, there is probably no other screen anywhere that could better approximate pixel-less vectorscope renderings than an iOS Retina display. Not only is the display crisp and smooth, but there is a nice, affected flicker to the vectors that makes the experience all the more authentic.

As for the aforementioned games — they aren’t just carbon-copy replicas of the original ROM cartridges; they have been modified to hook into Game Center leaderboard and achievement systems, to add a competitive element, absent from the original. And, what games are we talking about here?

The above list represents the currently available games at launch. The free Vectrex Regeneration download comes bundled with the original release MineStorm, the Asteroids-like game that came built into every Vectrex, as well as the four listed indie titles, the most notable of which is certainly Thrust — the best version of the game I have encountered. The rest of the listed original titles can be had via the Mega Pack that can be purchased within the app for $6.99. The Mega Pack also includes the iCade connectivity and WiFi remote-iOS-device controller feature packs.

Most people reading this will be unfamiliar with the bulk of the titles listed, and most of these games are nearly 30 years old. So…are they any good? It’s not just the obscurity of the Vectrex that holds it in high regard to retro collectors — the game library is also valued for containing many highly challenging titles that stand apart from those of most other consoles of the period. Vectrex games generally have that old school “simple" formula, but come off as quite unique due to the particular nature of the console.

There are about 10 additional titles in the original Vectrex library that Rantmedia is committed to delivering — in full — to those who have purchased the Mega Pack, at no additional cost, through future updates. Additional indie game packs (about 40 indie games exist for the Vectrex, in all) and feature packs will be forthcoming, as well.

So, enough details — how does it play?

As can be seen in the accompanying video, the standard iPad screen is almost exactly the size of the Vectrex’s CRT. When games load up with such smooth visual rendering (especially on a Retina display) through their color overlays, active vector flickering, and even the once-unfortunate, now-requisite audio hum that is ever present on the original console, the experience truly is authentic. And, that’s a win. When it comes to the iPhone, however, the significantly smaller display does offer a lesser experience, and it should come as no surprise. Despite the ability to move control buttons around the screen (more on that shortly), the Vectrex experience feels a bit cramped on something smaller than an iPad mini. (But, there’s an additional reason to have a copy on your iPhone, which I shall discuss in a moment.)

The system’s ability to faithfully run Vectrex games is certainly a core element but so, too, is the control system. And there’s a lot to say about controls, here. Let’s start with the iCade. Generally speaking, playing Vectrex games through Vectrex Regeneration on the iCade is amazing. And, it’s not just the physical stick and buttons (four across, just like the Vectrex), but the 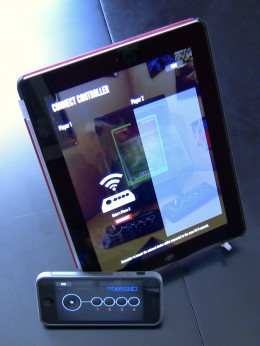 overall shape and form factor — how it physically resembles the Vectrex. I actually score far higher in MineStorm on the iCade than on my actual Vectrex. It feels awesome. iCade support comes as part of the Mega Pack IAP.

Next, we have the standard, on-screen controls. These involve a virtual analog stick and four action buttons. The buttons can be stretched, rotated, and moved around the screen to your liking, and the stick is the sort that lands and centers wherever you press on the screen. There is a stick sensitivity setting in the control settings area, and I found myself adjusting it quite often, unfortunately. Comfortable sensitivity, for me, varied wildly between games such that what was fine in one title was very much not so in another. Adjusting the sensitivity helped things out but, sadly, sensitivity settings are not saved on a per-game basis, so I was making adjustments quite often. I am in hopes that a control sensitivity save feature for each individual title comes in a future update to reduce the required jumps to the settings area. [Update 11/29: I’ve received word that the developer, in response to this request, has already implemented this feature into the system — it will be deployed in the first update.] 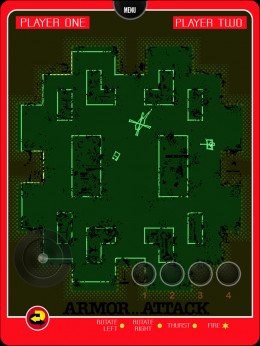 Finally, there is one or two player remote WiFi control via another iOS device — say, a couple of iPhones as controllers, connected to a host iPad. This, too, is part of the Mega Pack IAP option, and seems to make for an overall better experience than native on-screen controls. I prefer the fixed-stick mechanic of the remote device controller, but I use the word “seems" because, unfortunately, this initial release of Vectrex Regeneration has a bug that results in diagonal-only remote control in certain games. It’s a bug that Rantmedia assures me will be rapidly remedied in an update, however.

While speaking of bugs, I will say that I have noticed a glitch in a couple of the original Vectrex release titles and reported them to the developers, who indicate that they are to do with the 6809 CPU emulation routine and will, also, shortly be remedied in a coming update.

So, here we have a long review full of historical details, a hearty portion of praise, and a number of bugs identified right out of the gate. Houston, do we have a problem? Having spent a significant portion of the past 36 hours with this title, and in an e-mail back and forth with Rantmedia Games, I say the answer is: No.

Vectrex Regeneration emulates a highly obscure vintage platform. As an avid retro gamer, I see and use C64, Atari, Apple II, and Amiga emulators all the time — they area all based on highly popular CPUs that have been well emulated for decades. The Vectrex is based on the Motorola 6809, a seldom used — but arguably the most powerful — 8-bit processor. Vectrex Regeneration wraps that emulation in a jaunty 3D interface, offers most (soon all) of the original game library for those who like the free-download taste, and has trimmed it all with subtle touches that do make a difference. It all comes together to deliver an impressive Vectrex experience, even despite a few rough-start issues that are being presently addressed.