Last month, right before the release of True Skate ($1.99), Illusion Labs tweeted confirmation that a sequel to their classic iOS title Touchgrind ($4.99) was in the works. The timing seemed deliberate, as we’d essentially fallen in love with True Skate from True Axis and had noted in our review how it improved on Touchgrind’s shortcomings in just about every way. It looks like we’ll have a good old fashioned skateboarding game showdown on our hands soon.

Touchgrind was an innovative, technically impressive game when it launched in late 2008, but that was a long time ago. Though it did see an excellent bike-themed semi-sequel with last year’s Touchgrind BMX (Free), I always thought it was strange that Illusion Labs never pursued their skateboarding franchise further.

While it seems like Touchgrind Skate 2, the official name of the sequel, is still quite a ways out, a new website devoted to following the game’s development did go live earlier this month. There isn’t anything terribly substantial on their just yet, as the project is still in the extremely early stages, but they did post this awesome looking concept art for a planned stage in the new game. 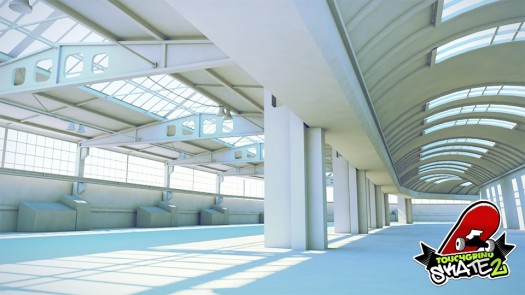 That’s exciting news for this Touchgrind fan as the limited skatepark location of the first game definitely got old after a while, so different locations seems like a must for the sequel. It also sounds like the team is really starting over from scratch rather than piling on to the existing Touchgrind, as they mention spending a lot of time making sure the physics feel right for the game, hopefully giving it a solid base to build upon.

I’m excited to see something more substantial from Touchgrind Skate 2, and if you’re feeling the same then make sure you bookmark their site as well as keep your eyes on our main page and the game’s forum thread for all the latest information.