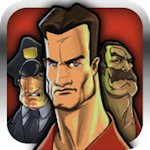 Earlier this afternoon, Jared and I spent some time with 21 Days ($0.99). It’s a stealth game that caught our eye initially because it looked vaguely like an old-school Metal Gear Solid title. In 21 Days, you play as a convict on a mission to escape his prison just before he’s transferred to maximum security. Levels are broken out across days, each introduced by bits of story.

Presented in an over-the-top perspective, the stealth isn’t exactly complex. Your main threats are guards and cameras, both of which have very specific movement patterns that can be exploited. A simple click and drag interface, similar to the one RTSes use, keeps character navigation breezy.

We’re still pretty early in 21 Days, but here’s a video. It seems like it’s a rock-solid stealth game, which is pretty hard to find on any platform.