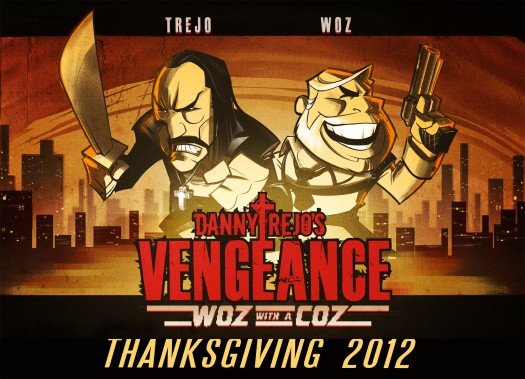 I always like those stories that are absurd head-scratchers, and this is certainly one of them. According to entertainment industry news site Deadline Hollywood, the most well-known movie extra of all time and all-around bad ass Danny Trejo will be teaming up with Apple co-founder and Outback Steakhouse enthusiast Steve Wozniak for an upcoming mobile title called Danny Trejo’s Vengeance: Woz With A Coz.

The mobile game is being produced to promote the upcoming movie ‘Danny Trejo’s Vengeance’, where Danny Trejo plays a retired cop who is wrongfully jailed and upon completing his sentence seeks to exact revenge on those responsible for the murdering of his family. It’s unknown at this time just how closely the mobile title will follow the plot of the film.

Did I mention that Steve Wozniak is starring in a mobile game with Danny Trejo? Because, yeah. Here’s the thing, though: Danny Trejo’s Vengeance: Woz With A Coz hasn’t specifically been announced for iOS yet, just “tablets" in general. However, I can’t imagine Woz would be in a game that didn’t appear on Apple’s devices, and I couldn’t imagine any developer wanting to exclude the iPad which basically created and is dominating today’s tablet market.

We shouldn’t have to wait long to find out though, as according to the above promotional art Danny Trejo’s Vengeance: Woz With A Coz is set for a release on or around Thanksgiving in just a couple of weeks, and we’ll keep an eye out for any new information until then.