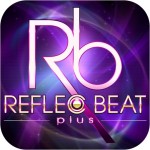 Reflec Beat + (Free) feels like the Tron equivalent to a one- or two-player rhythm battle game. You’re not zooming on bikes, but all the flashing neon, the flinging of note-pucks, and high-energy music makes each round feel like the stakes are high and that the winner painfully earned their survival. This is how you do touch-based rhythm games, on the iPad, anyway.

The goal is to get the highest score by tapping, holding, or flinging notes when they line up on your bar or the two hi-hat-like green cymbals above the bar. Players earn 1-3 points based on their timing, double that for hold notes, and 10 points for flinging notes.

This last, fast technique is referred to as a “just reflec," and has various conditions players must meet. It requires a golden note and perfect timing while sliding your finger. Players must build their Just Reflec Gauge to use this powerful slide attack. This gauge fills in proportion to how well you time each tap, too. For a music game, this is very intensity in ten cities!

In true Konami fashion, score rating is both intense and bizarre: a 90% achievement rate equals a AAA and 95% is AAA+. Getting a C is the lowest form of failure. Yes, this is grad school gaming. 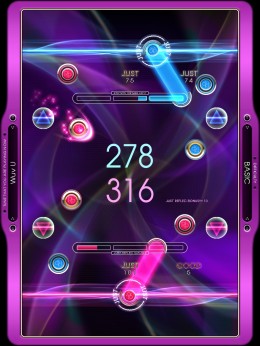 The math behind the score center leaderboard was something I had to figure out on my own. It’s the total score for all the songs I played. Given the 10-point value of the reflec notes, the score associated with a 100% achievement rate (which only cares about timing) may be lower than someone who’s reflec-ing a lot more. In other words, mastering reflec-ing is essential for high leaderboard ranking.

The game offers three difficulty levels, and the hard mode adds a ton of notes (also good for the leaderboard) and a third hi-hat cymbal above the bar. Extreme difficulties required most of my fingers at certain crescendos. Players can manually adjust the AI before every song, and this makes for an opponent that has better timing and uses its Just Reflec Gauge often.

This is the core Reflec Beat + experience, enjoyable on the iPad with one or two players, and it’s absolutely amazing. So few music-based games set out to do something new, and this feels so naturally fit and fun on a large touchscreen.

Along with rather loud and crisp sound even from the iPad’s weak speaker, Reflec Beat +‘s visuals are equally bursting, bright, and adjustable. The game offers an experience-based unlocking system that opens various options to change the background music, the visuals for the note explosions, the frame and background of the play board, and the sound of the tapped notes.

For the best experience, I suggest turning off the tapped sound effect, as it hampered my experience of the song. It’s not a key-sounded game, so I simply got odd effects like a volleyball, tennis, sword, clap, and even a sound called “Japan," all of which simply sully the purity of the great tracks.

Here goes more nitpicking, but the “+" just feels visually squished on the title screen compared to the spelled out “Plus" that more elegantly fits below the main title in the Japanese version. Still, fans of anything Konami music game related (Bemani) should be happy this was released outside of Japan in the first place. 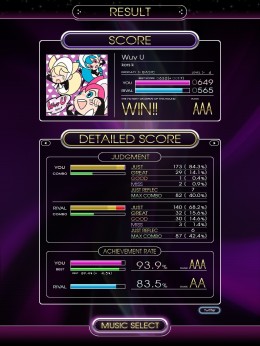 Speaking of an international release, I don’t see any attribution for localization in the game’s credits. And it shows. When I went to Tweet my score, I saw: “I played [song title] at REFLEC BEAT +" with a hashtag of #Rb. I know prepositions are tricky, but come on, Konami! How did this one Solid Snake its way into the game? Also, how are you going to get any social media recognition with a two-letter hashtag? The how-to-play section was hit a bit harder: “Touch object that the same color with bar goes to your side, at the moment of overlap on judgment line." Ugh.

The iPhone experience as a whole suffers much worse than the translation, and I actually don’t recommend the game for only smaller devices. Konami tried to acknowledge the issue of the small screen by moving the Just Reflec Gauge to the side and allowing the player to adjust the size of note-pucks. However, it feels too cramped to play well, especially when the notes shower heavily on the hard mode. The main menu is missing the music and artist quick-scroll features, too.

Konami also added a landscape perspective to play on smaller devices, which is literally a landslide disaster. The play space slants and the notes scale in size as they crawl toward the bottom. This perspective is so bad that the developers didn’t see a point in adding it to the original (in Japan) iPad version.

Lastly, and most damning I think comparatively, they removed the two-player mode. That’s not to say the game doesn’t offer a wonderful one-player experience; but removing the extended life and fun that the two-player mode can bring must be frowned upon. The premium experience of Reflec Beat + is truly intended for iPad users.

Did I say premium? I meant freemium. The 2 available Konami music packs for purchase are standard high-energy music that fits the frantic play. Those people who don’t quickly fall in love with the likes of DJ Yoshitaka, kors k, or Ryu (or haven’t already from their Dance Dance Revolution and Beatmania IIDX appearances) probably won’t find the rhythm appealing here.

Those who do love these styles can rejoice in knowing there are dozens of packs waiting to make the trek from the Japanese version. I’m assuming we’ll get our odd share of Toto, Cyndi Lauper, and Ray Parker Jr. though, as Konami has had odd music curation for its US cousin Jukebeat (Free).

Regardless of what era and genres Konami chooses in the future, though, the prices of each music pack has to decrease. At what is essentially $1 per song, this prohibitive price point will most likely make Reflec Beat + even more niche than it already is.

All that complaining aside, I feel I am the music-based, finger-flying adrenaline junkie that Konami sought to appeal to primarily. Shame on them for enabling my addiction, my spending an exorbitant amount of money on a weekly bump as each pack releases. More than any other music game I’ve played on a touch device, Reflec Beat + on iPad has me hooked.