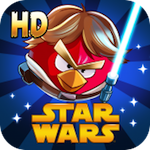 Earlier this morning, Eli and I spent some time with Angry Birds Star Wars (Free). It’s exactly what you think it is: Angry Birds, except with Star Wars imagery and characters. In fact it’s drenched with Star Wars stuff. Every level, bird, and most of the game’s mechanics, both old or new, are covered in a thick layer of Star Wars.

Red bird, for example, resembles Luke and has a secondary lightsaber attack that shears through hard surfaces and pigs. The blue bird is now a rebel pilot, able to fire spread shots from its pistol. Levels are set in classic Star Wars backdrops and every time the game introduces a “new" bird, you’ll see a classic Star Wars scene starring the birds.

We’re having a blast with the game so far, and really dig how Rovio is integrating all of its Angry Birds know-how into this title. Check it out for yourself below: