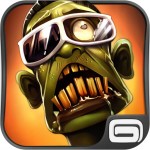 I’ve got to admit, it’s getting pretty hard to be enthused about zombie games these days. Not that there’s anything inherently bad about undead annihilation, but the market does seem to be getting over-saturated. Zombiewood (Free) tries to make a name for itself by combining familiar zombie killing mechanisms (in the sense of dual-stick shooting) with thematic settings and freemium elements. While most would rightfully be leery about any free-to-play elements, Zombiewood does a good job incorporating a dual-currency system into an otherwise solid game, making it well worth checking out.

Zombiewood puts you in the role of a stuntman turned hero after a zombie invasion overtakes Hollywood. After figuring out that the mass slaughtering of undead makes good film, your director decides to put you in a variety of flicks all centered around zombie killing. Each movie is divided into scenes with each featuring a variety of objectives to accomplish. Hit enough objectives and you’ll unlock a new movie to play in, with additional objectives to take on. It’s a standard story system, but I still enjoyed the way levels were divided into movies and scenes. The use of multiple objectives per scene is also a nice way to encourage replayability. 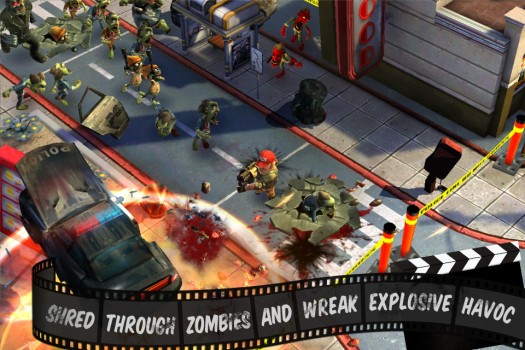 Meanwhile you’ll be taking down the zombie horde in basic dual-stick shooter fare. Players earn money (more on the dual currency below) and experience with each level, which allow you to buy and upgrade weapons, armor and supplemental “boosts," which allow you to complete more objectives (and unlock more movies, and so on). It’s a solid system that uses a tried-and-true formula and just works. Control-wise, Zombiewood controls like most dual shooters, although I really would have liked the option for floating sticks (as opposed to the fixed ones).

Since Zombiewood is a free-to-play game, I’m sure one of the more pressing questions folks might have is how restrictive the freemium elements are. Based on my play-through, I’d say that the freemium is more of an annoyance than a game-breaker. Freemium elements center around the game’s dual-currency system, with regular coins being collected and awarded through standard play while ‘bucks’ are doled out on a much rarer basis. 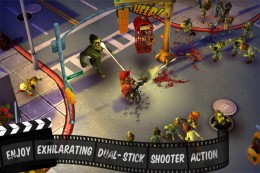 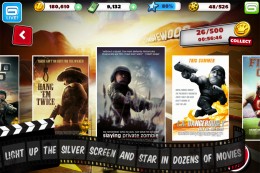 While bucks are hard to come by, I was pleased with how easy it was to earn coins. Completing movies allows you to earn ‘royalties’ which amounts to free coins every few hours, which also alleviates most coin collection issues. This makes it easy to buy and upgrade the standard weapons available for use. While Zombiewood does lock a certain amount of weapons, armor and power-ups behind their premium currency, they feel more like win buttons than items actually required to pass levels. While later movies do get tough to earn all the objectives with regular weapons, I never felt I was being restricted from progressing.

In fact, the biggest annoyance I have with Zombiewood are the ‘waiting periods’ that the game employs when upgrading weapons and armor. There’s really no reason to force players to wait (or shell out bucks) in order to use upgraded weapons and armor and is a blatant money grab. Fortunately, this is one of the few areas that feels like that, as the rest of the freemium system is surprisingly reasonable.

Another weird annoyance deals with Zombiewood’s visual engine. Despite the game not looking particularly taxing, I encountered multiple occasions of slowdown on my iPhone 5, particularly in scenes with large amounts of enemies. Granted, the problem doesn’t elevate to a significant disruption, but it was surprising nonetheless. Outside of the slowdown, I thought Zombiewood did a good job with its overall graphical style and presentation.

As sad as it sounds, it’s rare these days to find a free-to-play game that offers a good balance between actual gameplay and having to pay for extras via freemium elements. For the most part, Zombiewood does a great job hitting that balance. There’s a load of content initially available and there’s little in terms of hard pay-walls, with premium currency restricted to special weapons and boosts not necessary to progress. If you’re not tired of zombie dual-shooters yet, I highly recommend giving Zombiewood a try.