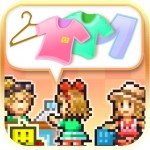 Do clothes make the man? In Kairosoft’s Pocket Clothier ($4.99), they do. There’s something strangely bittersweet about the Japanese company’s latest simulation game. Unlike its previous titles, Pocket Clothier won’t have you gallivanting across the nether regions of space or monitoring the growth of a mall.

Instead, it will put you in control of a little clothing outlet, one that you will, hopefully, turn into a thriving hotspot for fashionistas and the forsaken.

And that’s what makes me want to go “D’aww!” and slap a hand over my face all at the same time. Forget dangerous excursions through subterranean dungeons. Here, you’ll occasionally find yourself called upon by the denizens of Pocket Clothier to select an outfit that can help them acquire their dream careers. 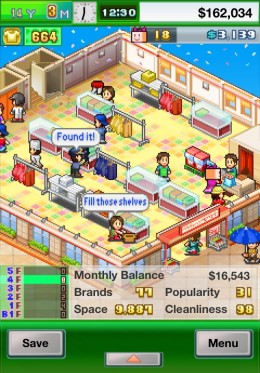 Once you’ve picked out a suitable set of clothing (these come with parameters like ‘glamor’ or ‘casual’), they’ll set out and engage in a variety of challenges – if they make it to the end, they’ll come back to tell you something fortuitous had led them to their dreams. And give you money.

But, we’re digressing. If you’ve played any of Kairosoft’s previous titles, chances are you’ll be completely at home with this one. In the beginning, you’ll be greeted by an impossibly chirpy companion, given a perfunctory introduction to how things work and will be left to slowly ease your way into the game.

It’s not hard. Really. You won’t even need to hire your first retail drone – there’s one with every new game.

Most of your time with Pocket Clothier will be spent building new racks and shelves to accommodate even more garments, hiring and training employees, providing fashion advice, installing facilities like lavatories, engaging in a variety of events and occasionally dealing with the more banal aspects of businesses.

You can also make use of medals earned from satisfied customers to buy new designs from your suppliers or to heighten the chances of a hapless soul’s interview succeeding. 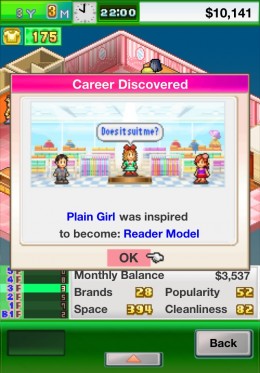 And, that’s about the sum of Pocket Clothier. It’s a business simulation that doesn’t require a hands-on approach, the sort of thing you could leave running on your iPhone while you go do something else.

Don’t get me wrong. This doesn’t make it a bad game, per se. There is sufficient strategy involved to keep simulation fans glued to their iPhones for more hours than reasonable.

Watching your business blossom into something worthy of high-class, well-funded clientele is a strangely engaging process, one that has me returning to it time and time again, intent on cultivating the best service staff I can muster. If there’s anything Kairosoft is good at, it’s making games you can’t stop playing – even when you’re not sure why you’re doing it.

Compared to previous titles like Game Dev Story ($4.99) or even the recent Cafeteria Nipponica ($4.99), Pocket Clothier doesn’t feel quite as deep. There is a pervasive familiarity to the game, a sense that ‘we’ve seen it all before’, something that could be partially attributed to the now iconic art style. It plays well, but it’s a song that we’ve all heard before.

Nonetheless, if you’re new to the company or just have to have yet another Kairosoft game, Pocket Clothier will not disappoint. Just don’t expect it to shock, awe and amaze.