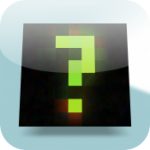 Curiosity: What’s Inside the Cube? (Free) is crowd-sourced pixel-poking. The app presents you with a gigantic cube. Think of it as a birthday gift: a cube comprised of layers and layers of smaller cubes. You kerplode the cubes by simply touching them. At the center of the cube is a secret, and there’s no telling how many licks it’ll take the world to get to its chewy, mysterious center.

According to Peter Molyneux, the famous — or infamous, in some circles — games designer behind Curiosity, the center of the cube is “life-changingly amazing by any definition.” Molyneux promises a lot features for his games that don’t pan out, so the question of whether Curiosity will ultimately deliver is a valid one. It’s also silly: does anyone really expect a free iPhone app to change anyone’s lives? Ladies and gentlemen, whatever awaits us is, essentially, just a global Rickroll. 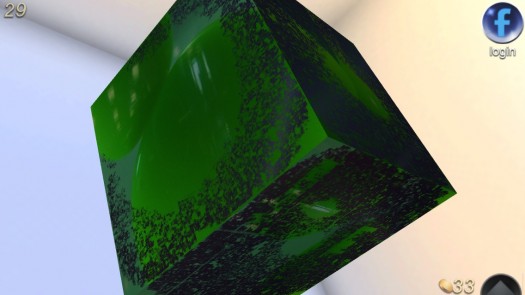 So, no, the world hasn’t yet unwrapped Molyneux’s Pandora’s box supposedly brimming with infomercial-like life-changing abilities, but the core issue here isn’t what is being promised. It’s that the game flat-out ain’t fun. Heck, it isn’t even interesting.

Actually, Curiosity isn’t even a game: it’s a child’s toy, stripped of depth and without an ounce of respect for its audience’s intelligence. Though it still has come with the requisite Molyneux-style carnival-barker promises. When asked to elaborate elaborate on his claims for ‘Curiosity,’ Molyneux lifted up his dark cape from the forbidden land of Narhal and disappeared into the night.

Dernit! Complete world knowledge could have been ours! And all we asked for was a simple clarification on a basic fact about an iOS game!

We all, hopefully, know to take Molyneux’s grandiose claims with an even grander grain of skeptical spices (salt or tarragon, for example), but that still doesn’t stop him from making outlandish claims about what he’s working on. It’s commendable to be proud of what you’re working on, but there’s such a drastic difference between what Pete’s describing and what this game is.

Each session starts with you returning to the game’s current cube already in progress. You can zoom in, zoom out, flip around to a different side and get to work. Cooperating with all the other players, you work together to peel away the cube’s sides, one side at a time. There’s a “combo" meter of sorts that picks up steam as you chisel away quicker and quicker, which works much like the game Principal Skinner described in the episode of The Simpsons where he got trapped in his own garage and dribbled a basketball to stay sane: you set a record for yourself and then try to beat it.

The twist is everyone is mining to see what’s inside the box, and that only one player will get to see its contents via a video link that individual is free to share or keep to themselves. We’ll all get there sooner with the more squares that are demolished: the more squares you decimate, the more coins you earn, which means the more powerful tools you can use to destroy the cubes. Lather, rinse, re-cube-peat.

You can check back to see how the world’s doing in the age-old quest to murder all the cubes in existence. Either they’ve gotten rid of more cubes or they haven’t. That’s about it.

And yet, many will claim Curiosity is brilliant, which further cements gaming’s awkward attempt to be perceived as art. If anything, Curiosity is iOS’ 2001: A Space Oddysey because many will claim to “get it." What they have gotten, really, is a Cow Clicker on a Rubik’s Cube, except with a vague assurance it will somehow blow your ever-lovin’ mind.

[Edit: Note, this review should fall under “1 star" rating, but due to some technical errors, is appearing as a 2 star for the moment. Will be fixed shortly."]