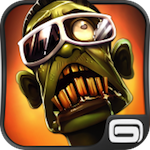 Earlier this morning, Eli and I spent some time with Gameloft’s Zombiewood (Free). It’s a dual-stick zombie shooter that tasks you with killing a bunch of zombies across a variety of scenarios. In one level, you’ll defend a boy as he runs around an undead-laden town. In another, you’ll put out fires while the dead harass you. The scenario design in general is one of this game’s high points, surprisingly. You’ll always be doing something.

As you play, you’ll level up your dude and gain access to newer, bigger, better, and increasingly more outrageous weapons that can be upgraded with the game’s currency. As with most free-to-play titles, there’s also a “control" currency that’s rarely dished out, but is necessary for the best weapons and, oddly, support stuff.

We’re still gathering our thoughts on this one, but we’re high on the game so far. If you like shooting zombies and dual-stick shooters, considering give it a whirl.