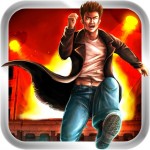 Like so many of the most ingenious gaming concepts, the endless runner is so simple and effective that it’s hard – if not impossible – to bring anything fresh to the concept once it’s been out there in the digital wild for a little while.

Tetris, Bejeweled, Flight Control and so many other genre-founding titles provided such tight and engaging mechanics that they effectively sealed the door behind them, but that doesn’t mean there haven’t been some highly entertaining derivatives that followed. Save Them All ($0.99) is just that kind of respectful homage to the brilliant – if limited – Canabalt. The real question isn’t where it gets its inspiration from, of course. It’s whether you need this game if you already own an endless runner collection.

Save Them All promises you a story mode, which is very rare in this niche genre. But don’t get too excited about that aspect; for the most part the plot boils down to occasional and shabby comic book cut scenes and a trio of objectives for each level before you progress to the next one. The lackluster story mode isn’t a deal breaker, as this isn’t a game style that really lends itself to storytelling, but neither is it a particularly strong selling point. 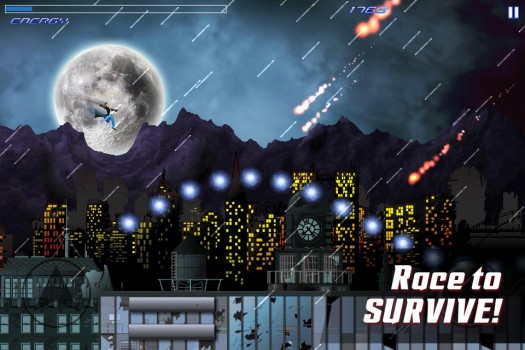 For the first quarter of an hour (and probably a little longer depending on your endless runner expertise), all you really see of Save Them All is a colorful Canabalt carbon copy, with little to elevate it above the white noise of runner clones. But it’s worth sticking with the gap-jumping action, as it eventually – almost reluctantly – gives in and begins to reveal its hidden charms.

You’re gradually introduced to a whole roster of abilities beyond well-timed jumps between buildings and an increased running speed. Double jumps and crash landings are brought into play, which use energy from orbs you collect as you sprint across the city-scape. As long as you’ve always got a bit of energy in your pocket, a bad jump can generally be salvaged, and aggressors can be dealt with by a crushing blow from above. 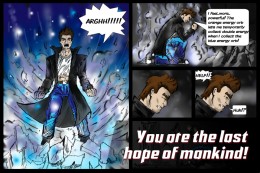 Gathering up energy orbs isn’t the only task you’re presented with. The remnants of humanity are left wandering aimlessly around the rooftops of the world as the apocalypse rains down in the background, and are collected up as you high-tail it past them. These survivors are effectively the in-game currency, and can be swapped for extra powers – such as do-overs, brief bouts of flying, or an energy orb magnet – in the store.

Yes, you knew there was going to be an in-game store, right? In-app purchases are available for those of us who don’t want to spend time ‘saving them all,’ and would rather drop a few coins in the slot to unlock the next world, item or power. The good news is that Save Them All isn’t greedy. You can play and progress very happily through honest gaming labor rather than paying for your goodies, so don’t let IAPs put you off if this is your kind of game.

But certainly you’ll make use of your human coinage once the zombies start chasing after you across the roofs, and missiles fly across the screen right where you wanted to jump. Power-ups are your only hope of prolonged survival, so don’t get cheap when it comes to spending survivors. Fending off these attacks is a major aspect of the action as you get further into Save Them All, and the only complaint about the rampant chaos you find yourself plowing through is that it doesn’t happen sooner.

And this is the crux of any real downside to Save Them All. It feels to hold back far too long, and impatient players could easily drop it on the scrap app pile before discovering its well-buried value. Much like collecting up the survivors to spend in the store, your perseverance within the game is rewarded.

Will you still be playing in six months? Unlikely, but for now it’s a welcome, high-speed, fire-soaked distraction.