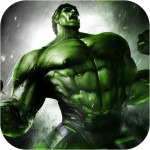 Just over a month ago, Avengers Initiative ($1.99) from Marvel and Wideload Games made a surprise debut on the App Store. We were initially quite intrigued by the shiny comic book characters, but after taking the game for a test drive in a TA Plays video, we came to find out that Avengers Initiative was essentially Infinity Blade with a Marvel Universe re-skin and The Hulk as the main playable character. Not necessarily a bad idea on paper, actually, but the extent of the similarities to Infinity Blade made Avengers Initiative feel extremely hollow and uninspired, and kind of boring as evidenced in our review.

Anyway, I don’t want to totally be a Negative Nelly about the situation. Since its source material was already a great game, that means that Avengers Initiative wasn’t that bad for what it was: an uninspired Infinity Blade clone where you play as The Hulk. I mean, there’s got to be some value in smashing on bad dudes as the big green fella, right? Well for the original price of $5.99 that might have been a harder pill to swallow in the iOS game world, but right now you can nab Avengers Initiative for half price, making it a much more attractive prospect if you’re a Marvel fan looking for something shiny to play on your device.