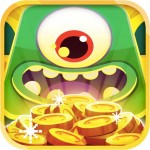 Last year Adult Swim Games and PikPok collaborated to blow our minds with a match-3 game. Yeah that’s right, a match-3, one of the most tired and overdone genres on the App Store. It was really their rethinking of the matching mechanics and a high level of presentation that reinvigorated our match-3 love with Monsters Ate My Condo ($0.99), and now almost exactly one year later they’ve done it again with the follow-up Super Monsters Ate My Condo (Free).

As those of us who grew up with a Super Nintendo or the Street Fighter II series have come to learn, slapping “super” onto the front of your game’s title indicates that it’s built upon a familiar experience, with upgrades or new features to create a better overall experience. You weren’t just playing with power, you were playing with SUPER power. That is true of Super Monsters Ate My Condo as well.

The core gameplay concepts remain largely unchanged from the original. You’re still dealing with a condo tower that gets built in the middle of the screen by individual floors dropping from above. The floors come in four different colors and by matching three or more of each color those condo floors will combine into a single, upgraded floor. Combine once to form a Bronze floor, then combine three Bronzes for a Silver floor, three Silvers for a Gold, and three Golds for a Diamond. 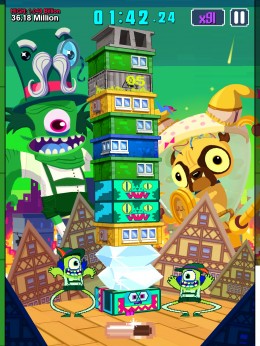 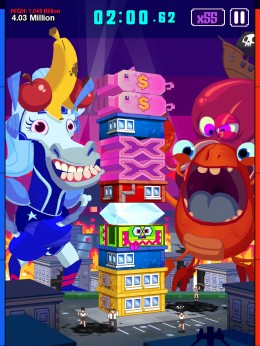 Then you have your monsters. There’s four of them, each matching a color of the condo floors. There are always two of the monsters on screen at once, one on each side of your condo tower. You can swipe a floor either left or right into a monster and the’ll gobble it up, making the tower collapse down to fill the void of the missing floor and hopefully create some matches. If your match is the same color as one of the currently active monsters, they essentially “tag out" and one of the other monsters takes its place.

The catch is that the monsters only like eating the floors that match their own color, so feed them too many of a different color and eventually they’ll get angry and shake your tower. Just the act of swiping floors can throw your tower off kilter, and angering a monster will ensure it gets knocked around even further. Making matches will straighten out your tower a tiny bit, but it’s something you’ll have to always keep an eye on since if your tower collapses and falls to the ground, it’s game over. You can also make them angry by not feeding them anything at all for too long, so it’s something that needs to be monitored while you play.

Special types of condo floors enter the mix too, like a concrete one that cannot be swiped away and can only be cleared by making a match next to it, or a bomb condo which will explode and shake your tower up if not cleared in time. Super Monsters Ate My Condo introduces some additional new types of condos, including a clock condo that can add time to your play session or an acid condo which will slowly eat through the floors below it until you clear it away. 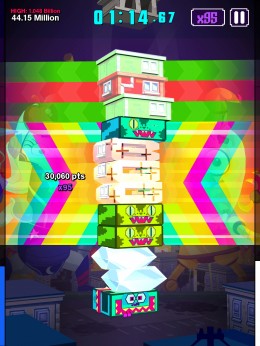 Each monster has their own unique special ability, too. Feed them an upgraded floor and you’ll activate their power for a short time. How long it’s active is based on the grade of floor you feed them, like a Gold Floor will make the ability last longer than a Silver floor, and so on. An example of these abilities is the red monster Boat Head who slows time and puts the other monsters to sleep so they don’t get angry and mess with you, and it also prevents “bad” floors like the bomb and acid ones from causing you harm.

In the original Monsters Ate My Condo you had an Endless mode where difficulty would gradually increase and you kept on going until your tower finally fell. There was also a Time Attack mode which gave you 2 minutes to score as high as possible. In Super Monsters Ate My Condo, this 2 minute timed mode is the main mode, with no sign of the Endless mode.

This is actually a welcome change, since games in the original could take a VERY long time to complete, which isn’t so conducive to a mobile experience. It feels more focused now too, though I’ll admit I wish the Endless mode was still there as an option for when I was in the mood for a long session.

However, my favorite new addition to the game is a sweet Jetpack Joyride-style mission system. It’s similar to the goals in the first game, but with a little more meaning behind them. You’re presented with 3 missions at a time, and completing all 3 will give you stars which go towards a leveling system and a fresh batch of missions. What’s interesting is that some core elements, like some of the special condo floor types, are actually unlocked through this leveling and mission system. 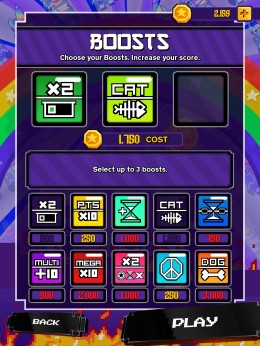 I thought it was kind of weird to lock away such intrinsic parts of the game, but as I kept playing I actually grew to appreciate it. It really is a good way to ease players into the more advanced nuances of the gameplay, and I love always having a set of goals to shoot for with each game I play. It’s very meta, and encourages me to give it “just one more go” more so than the original game since I’m anxious to level up my profile some more and see what I’ll unlock next. Having these shorter game times really works well with this system.

Now I need to address the biggest change in Super Monsters Ate My Condo, and it’s something that will likely flavor many peoples’ opinions of the game. There is now an in-game currency and a new shop that sells special booster items. You earn coins just through playing and, obviously, you can purchase more through IAP if you wish. It’s not a bad idea in and of itself, but these booster items will definitely affect the kinds of scores you can attain, and consequently the purity of the scoring.

The boosters are initially unlocked through the mission system, but they’re consumable and require coins each time you want to use them in a game. This means that people who pay for a bunch of IAP coins will be able to use these perks liberally, compared to those who just earn coins organically through play, which is a painfully slow process. In addition to the boosts, there’s also an assortment of hats you can buy for your monsters that will increase your score multiplier, and these too require a pretty large amount of coins to purchase, but thankfully are permanently unlocked once bought.

Technically the boosters and hats are available for everybody, so it’s not like IAP is required to play Super Monsters Ate My Condo. And you certainly still need the skill to actually play well when using the boosts. But I can’t help but feel that those who drop their real life cash for the in-game kind will always have the upper hand, which is unfortunate for a game that’s so focused on high scoring. Ideally I would love two separate leaderboards, one for those using boosts and one that doesn’t allow them and keeps things pure. Maybe in a future update. Brad and Eli touch on some of this in our TA Plays of Super Monsters Ate My Condo.

Despite the currency and consumable booster system, I’m still having a ridiculously good time with Super Monsters Ate My Condo. It really does improve on the vast majority of what made the original great, earning the “super” in its title. The addition of a vanilla leaderboard and an Endless mode would perfect the package for me even further, but as it is I’m really hooked on completing missions and leveling up, and the boost and hats are still pretty fun to use, though kind of imbalanced. It’s definitely a more strategic game this time around with the new condo types, shorter games, and lots of combinations of perks to try.

If you enjoyed the first Monsters Ate My Condo, I think this is an upgrade that’s worth your time and dollar. It looks better, it sounds better, and it still has that completely wacky style that’s almost impossible not to love. If you’re worried about the purity of scoring, you can always jump over to the original, or “separate classic mode" as I’m going to start calling it. The two games are very similar. However, there’s been so much improvement in practically every area that Super Monsters Ate My Condo easily bests its already fantastic predecessor, and I think offers a different enough experience that it’s worth keeping both versions in your gaming rotation.