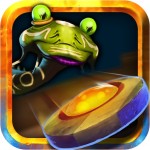 In our review of Shufflepuck Cantina (Free), we felt that the game’s primary flaw was a brutally steep challenge curve. Many players were likely to give up after a few punishing games, and others would find the high speed on the relatively short table to be impossible to adjust to.

Well, if you’re a shufflepuck wuss, like me, help has arrived. A new update adds “Training" difficulty to duels. It’s worth nothing that Training mode is only for standard duels (first one to five points), and not the high-stakes Betting mode or Survival mode. Also, in Training difficulty, rewards are reduced and you can only win bronze or silver medals, not gold (even if you play a perfect game).

It’s clear that Agharta considers “Training" to be just that, a way to get players acclimated to the game. For me, it represents A New Hope of actually enjoying the game rather than banging my head against it.

They’ve also added the option to turn off the game’s music, which is a boon in itself, as the game’s sound is high-quality but the music is on a short loop.

If you deleted the game, this might be cause to reinstall it: despite the beautiful graphics, Shufflepuck Cafe is a mere 40 megs, a testament to Agharta’s in-house engine. There’s another good reason to leave this app on your device: while real-money items (like the Duraniam card) can be restored, unlocks you purchased with Credz will be locked again if you delete and re-install the game, and any Credz you paid real money for are gone.

That’s not particularly evil of Agharta, it’s just how free-to-play works. In this case it stands out, because everything you can buy with Credz in Shufflepuck Cafe is a “permanent" unlock.