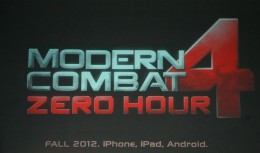 Modern Combat 4: Zero Hour has been announced courtesy one of those shaky cam video game trailer “leaks" that people on YouTube seem to like so much. Earlier this morning, a bad version of Zero Hour‘s upcoming reveal trailer hit the web, revealing a premise that’ll have players keeping their heads on a swivel, staying frosty, and killing bad dudes in an attempt to save a kidnapped president.

We don’t have a ton of meaningful details to share since the trailer doesn’t dive into the game’s mechanics or game modes, but it appears plain that this is going to be a video game with modern vehicles, places, and guns in it. You’ve played one of these before, right?

Zero Hour is expected to hit across iPhone, iPad, and Android this coming fall, according to the trailer.