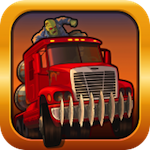 Earlier this afternoon, Eli and I gave Earn to Die ($0.99) a spin. In a nutshell, it’s a runner with cars, but the goal revolves around upgrading for better performance rather than raw high scoring. In the game, you play as a stranded survivor who is trying to bolt from a zombie apocalypse-y desert scenario. The only way you can ultimately escape is by tuning and tweaking cars, slowly giving them enough juice and ammo to reach the next level.

It’s a next game with a bad name and refreshing despite having zombies. A lot of the recent zombie car games we’ve been seeing have been literally terrible mechanically, so it’s nice to play one that works and is also pretty entertaining.

If you’re a fan of these kind of grind-y “run until you can’t" games, definitely give this one a spin. We think you’ll dig.