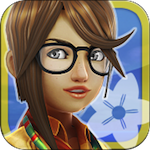 One of our app users’ most anticipated games, an Unreal Engine 3-powered adventure game dubbed, simply, Lili ($0.99), is now out and available. High-profile games like this one usually see early international releases before they hit worldwide, but with the changes coming to the App Store and its support of the latest iPod touch and iPhone, it hit well and wisely before the usual Wednesday night / Thursday rush.

One of the things we’ve been struggling with since seeing Lili the first time is pinning down what exactly it is. Is it an adventure game? What’s up with its non-combat fighting system? Also, just how many RPG systems and genre tropes will this thing roll in?

After spending an hour or so with Lili, it’s still hard to pin it down. It’s a weird mix of RPG and adventure game elements, with an emphasis on the latter.

In the game, you play as a girl named Lili who lands on a mysterious island. You’ll be tasked with picking flowers across this island in a grand attempt to impress a teacher with your ability to discover and capture exotic flora. 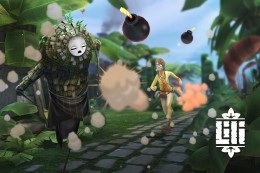 The catch is that picking flowers is not exactly easy. This island is inhabited by new, exciting breeds of flowers, yes, but also spirits and golems. Spirits, it turns out, are what you’ll need to target in order to scoop up the best and brightest flowers.

Spirits are big, organic monstrosities who apparently want their flowers. So, they bolt if you walk up on them. Your goal, then, is to catch these spirits first, mount them and then pick the flowers from their oftentimes bulbous backs.

On a functional level, Lili is a 3D, open-ish world adventure game. With swipes and taps you steer Lili around the world. A double tap, for example, sends Lili into a run, which is how you’ll be able to catch up with the majority of spirits in the early game.

We say “open-ish" because of the nature of the design. Lili is broken down cleanly into sections, each one a “town" of sorts with roving NPCs, stores, and treasure chests. The first two towns have you running through them capturing spirits, and then returning to a trainer to pick up a quest reward. There are also NPCs that have specific wants, and you can earn items that’ll help you if you’re able to deliver what they need. 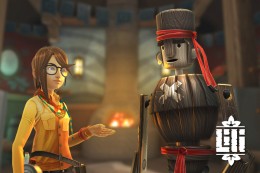 The simple structure of the world informs the nature of quests and exploration. There’s not a lot to see and do, outside of talking to an NPC, getting a notification, and then maybe finding a treasure chest with the item they you need to fetch. The combat, on the hand, is kinda interesting: to pick a flower, you need to pull it from the root with a sharp swipe. When you’re on the back of a spirit and the camera is shaking, this can be a rough task. Adding to this, spirits also grow thorny flowers you’ll need to avoid and, for whatever reason, can grow bombs that you’ll need to tap frantically to get rid of.

Items and stats can help you with the mechanical task of catching spirits. Grasping, running, and sneaking are all upgradable skills, and you can equip stuff that’ll provide bonuses to each of these. It’ll be interesting to see if actual capture of spirits ramps up in the later game, if it becomes something more cerebral than just “run at the spirit and hope you can keep the camera properly behind your back as you do it."

Lili is an interesting game, for sure. Its technical, art, and sound production are off the walls good and well executed. And while its mechanical parts are technically without flaw, we’re hoping that the game, mechanically, ramps up. In the early going, Lili feels like a game without a pulse. All the systems — the RPG stuff, the exploration, the combat-less combat, and the world building — are there, but not utilized to the extent that they could be. It’s a little flat.

We’ll give you more on this in the future in a full review. We’ve got some footage of the game in action, too, if you’re into moving pictures.