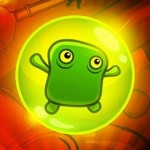 It’s no secret we’re pretty big fans of platforming games around TouchArcade headquarters, so when we spot a new one that looks like it has some potential we feel it’s our duty to spread the good word to the like-minded gamers out there. Today we’ve got our eyes on Wimp, an upcoming puzzle platformer from Flexile Studios.

Emphasis on the “puzzle” in that description, as Wimp seems to be heavily skewed towards figuring out various environmental physics puzzles along with the general running and jumping associated with platformers.

Also, your character is encased in a bubble of…er, snot? Slime? Something gooey and weird, whatever it technically is, but it’s also something that affords more opportunities for puzzle mechanics. Your slime ball can stick to certain surfaces and, it appears, also be set on fire, among other things. Just give this gameplay trailer for Wimp a look and see for yourself.

Wimp is currently in a beta testing period, with many members in our forums taking part and having plenty of positive things to say about the game so far. If all goes according to plan we should all be playing Wimp sometime this month, and we’ll be sure to let you know once we hear anything concrete in regards to release date and pricing.