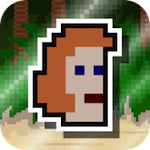 Indie game creator Sos Sosowski embraces silliness and loves action. He also digs point-and-click, too. With his new game he has combined these elements into an incoherent, but lovely fast-paced adventure game where failure often yields the most compelling results.

Put a gun to my head and force me to categorize McPixel ($2.99), and I’ll say it’s a point-and-click game. I’d feel terrible about it, though, because it’s definitely not traditional genre fare. In the game, you’re tasked with defusing or getting rid of bombs across 100 levels. In each level you’re given 20 seconds to find a solution using absurd adventure game logic that has you doing things like, say, handing a bomb wrapped in a hotdog bun to an alien smoking an illegal substance — on a desert island. 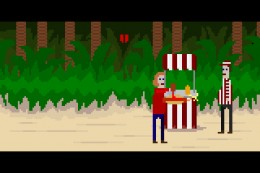 The game’s pacing — which reminds us a lot of WarioWare — is what makes McPixel pop, and what makes us think twice about its categorization. McPixel whisks you from level-to-level, never stopping until you complete a set of levels. Like an epic fail carousel, you get the opportunity to keep re-retrying levels you blew in a fast-fire, circular fashion until you discover the solution.

Failure is awesome. The hotdog level, for example? You can try to put out the bomb with ketchup, which is conveniently located in a cart next to the bomb. If you go that route, however, you’ll lose because, well … McPixel decides to splash the bomb-with-ketchup in his face instead of smothering the bomb’s wick.

We talked with Sosowski this afternoon and learned some things about how he approached the design of McPixel. As you play, for example, you’ll notice that none of the levels have any connective tissue. Sosowski says that’s by design. He made McPixel on the fly, sometimes creating scenarios where he didn’t know the outcome until the last second. 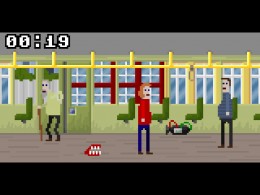 The one thing that he did know is that he wanted an action-y point-and-click game, as he was a little tired of hour-long adventure game scenarios wrapped up in a cohesive story.

For what it’s worth, this mindless approach works. McPixel has a playful kind of feel to it, and we’re certain that this is a side effect of Sosowski playing it so loose. Unlike most adventure games, McPixel isn’t concerned with establishing puzzle logic or a world or even coherent situational content. It’s completely, and delightfully, off the wall in every single imaginable way. From kill screens to bombs-in-hotdog buns to Star Wars references, McPixel has it.

You can listen to our talk with Sosowski above. And if you’re a PC or retro fan, there’s some good news buried in there. Sosowski is currently working on bringing the game to Steam via the service’s upcoming crowd-sourced Greenlight initiative. Also, a Commodore 64 version of the game is in the works.

Anyway, we took a video look at McPixel earlier today, so check that out if you’d like some moving pictures to go along with these word pictures. McPixel continues to be on sale, and it appears as though it’s ending soon.