You know a game’s good when you have a hard time putting it down to write the review. I confess, I was skeptical, watching video of Coconut Island‘s One Tap Hero ($4.99). Could a puzzle platformer whose only interface is “touch anywhere" actually deliver on gameplay? Sure, One Tap Hero was a finalist at IGF China, but a lot of original concepts get lost or played out in the transition to being a commercial game.

One Tap Hero pulls it off brilliantly. The controls are beyond simple and perfectly responsive (tap, or for jumping, tap and hold for a longer jump), the level design is varied and remains interesting and challenging throughout the game, the IAP is unobtrusive and truly optional, and the game is really cute without ever being cloying.

Timing is everything in precision and puzzle platformers alike: One Tap Hero has learned that lesson well, and combined it with the fundamental mechanic of the endless runner: the game’s protagonist is always in motion, and you can’t just tell him to turn around. He runs until he hits something, and many obstacles (labeled clearly with tiny green arrows) will cause him to turn around and start running the other way. I don’t think One Tap Hero would exist if it weren’t for the endless runner, but it doesn’t play at all like one. It’s more like Limbo on Prozac, GravBot (Free) or Wind-up Knight (Free). 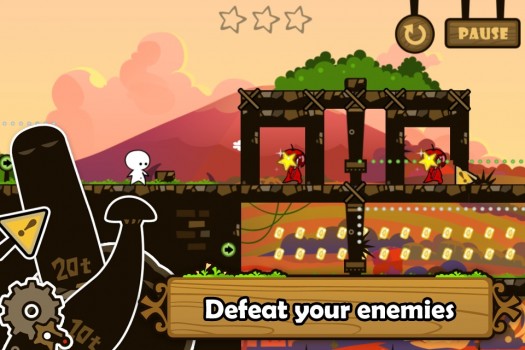 Tap to jump, tap to flip a lever. Tap to climb a ladder: it’s all really simple, and completely dependent on good level design. Which One Tap Hero has in spades. It’s clear that a lot of thought was put into each and every one of the game’s 100 levels (with more coming), from the straight-forward tutorials to the deviously complex ones.

There are homages in here to classic games from Donkey Kong to Shadow of the Colossus, and every time that you might begin to suspect that the game’s concept is played out, a new element or a new twist on an old one pops up. The most remarkable example of this comes halfway through the game with the addition of roaming enemies who will chase you if they see you, collect the stars you need to win, and flip levers they come across.

It’s a whole new game with the addition of these apple-headed nudnicks, and you can bet that you need to account carefully for their behavior if you want 3/3 stars. In addition to stars and coins, there are also keys (to unlock bonus levels: 20 of the game’s levels are  locked) and mega-coins (1000 coins).

These bonuses only appear once: you can’t replay the level to rack up a massive fortune. Coins can be used to buy additional keys and (purely cosmetic) costumes, and yes, you can buy coins with real money. But there are enough keys in the game to unlock every door, you just have to figure out how to get to them. Mega coins are often the trickiest grabs, but they’ll let you spruce up your duds and buy extra keys, if you really need them.

The game’s premise is cute and weird. You’re in love, but there’s this crazy evil wizard guy who keeps turning your girfriend into a bear. That’s right, a bear. At the end of each level, if you got all three stars, she turns back into her normal stick-figure self and winks at you. If not, well, the first time I saw the “no star" animation, I burst out laughing at my own incompetence. In the “getting the details right" department, these animations are very short (about 2 seconds) and you can skip them if you choose.

One Touch Hero isn’t perfect: there are times when I thought I was looking for a clever solution when what I really needed was better timing, and the difficulty ramps up and down considerably between levels, rather than following a consistent slope. These, however, are minor quibbles with a game that takes iOS platforming and “one button" gaming in a direction I’m amazed no-one tries to do more often in touch screen gaming.