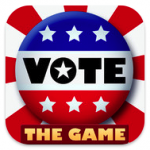 So, Chair Entertainment has been making a new brawler. It’s called Vote, and it’ll be available a little later tonight, as international releases make their way across the world. If you’ve been playing Infinity Blade over the years, you’ll be comfortable with this, as it plops the same gesture-based fighting mechanics into a much slower, goofier, and simple shell.

In the game, you’ll be able play as Barack Obama or Mitt Romney and take part in one-on-one “brawls" where hits are called “debates" and parries “rebuttals." Each hit is scored and boosted by a bonus meter. The goal of a fight is, simply, to score a ton of points.

Attacks are gesture-based and 1:1. Swipe left, and you’ll attack to the left. Swipe to the right, and you’ll swing your weapon to the right. When your opponent attacks, you can either dodge or block the maneuver. Time these perfectly, and you’ll put him in a daze, which opens him up to a flurry of attacks and points to be scored.

At the end of every round, you’ll be graded with “votes," which feed into a larger pool of data. There’s a graph in the opening menu that keeps a record of the overall tally of who has more votes: Romney or Obama. That’s kinda neat. Kinda.

Like Infinity Blade, Vote has a combo system. Combine the right attacks together and you can pull off a much more lucrative flurry — points-wise. Vote has coins, too, which you earn by tapping on your opponent’s joints during cut-scenes and for finishing rounds. With these, you can buy optional costumes, weapons, and even one-use power-up items, including one that expands the amount of time you can spend in a single match and one that doubles your points.

One thing we’ve noticed about Vote is that it’s really slow. You can see attacks coming from a mile away, which makes them pretty easy to avoid. Imagine Infinity Blade running at half-speed, and you’re picturing what Vote‘s pacing feels like.

It’s pacing, and well, goofy premise makes Vote hard to enjoy on a raw, nuts and bolts kind of level. It’s clearly a novelty, just a thing that has been made to celebrate the election season. So, lower your expectations based on the Chair’s chops as designers. This isn’t the game you’ve been looking forward to, you know?

Anyway, Vote should be out tonight. Check out our video, and hey, if you like it, check it out. Video games, huh?