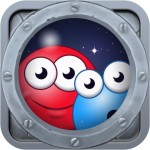 SolaRola (Free), a 2D platformer from Square Enix, has a lot going for it. It’s charming, accessible, and realistic physics that players manipulate to solve increasingly complex puzzles. Unfortunately, it’s also rather bland.

You play as Waz, a red blob jetting through space with his pal Wiz when their ship crash lands on an alien planet. To get back up and running, you roll, bounce, and swing Waz around a series of planets to gather parts for the wrecked ship. That’s how the adventure starts, anyway.

Cosmic mischief ensues, and Waz has a slick set of moves tailor-made to get in and out of trouble with ease. You roll around by tilting the device, a method which holds up well at first but becomes a liability later on when even the slightest twitch can send you toppling into danger. The alternative is a set of left and right virtual buttons large enough to offer better precision. 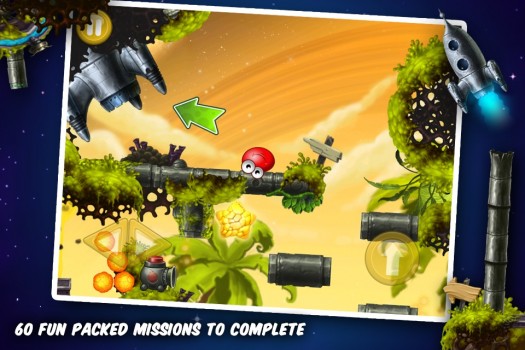 A jump button springs Waz over short distances, but Mario he is not, so most levels require you to rely on the environment to complete objectives. Lava pits, for example, can be crossed by swinging across ropes, bouncing off pinball-like bumpers, or using bombs to blast loose a stream of rocks that roll over the liquid fire, creating a makeshift bridge.

The levels start out simple but become riddled with a mishmash of elements as you progress. To survive, you’ll need to hone skills learned over the first 20 or so stages to make your way through veritable obstacle courses.

And therein lies the game’s main failing. Solving more advanced brain benders is satisfying, but SolaRola takes so long to get sola-rolling that veteran platformers might get bored before things finally get interesting. The visuals are stylish and colorful, the story is cliché but witty enough to keep you interested in the between-stage shenanigans, and the puzzles interesting enough.

The problem is SolaRola just doesn’t offer anything compelling enough to justify its admittedly inviting price point. You jump, you roll, you solve puzzles. SolaRola feels like ground retreaded down to clay because it lacks a special thing, a hook that compels you to play it versus all the other platformers, physics-based and otherwise, on the App Store.

I would be remiss in closing this review without mentioning the grating sound effects. Well, one sound effect in particular. Every time – every single time – Waz jumps, he emits a nails-on-a-chalkboard “Weee!" that comes through so garbled you’d swear you were playing a Sega Genesis game. The rest of the SFX and the soundtrack are fine, but you can’t mute the effects and leave the music running. It’s all or nothing, and within two levels, three at the most, you will decide on nothing.

Grading games like SolaRola prove a challenge to me. It’s not bad, it’s just okay. On the App Store – a platform clogged with puzzle, platform, and physics games – “okay" doesn’t always cut it.