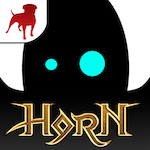 Small improvements to an established model can make a world of difference.

Horn is the second mobile title from Phosphor Game Studios, a somewhat large indie games studio based in Chicago. Its first game was Dark Meadow, a moody and ambitious hack and slash set in the bowels of various scary locations. Horn ($1.99), on the other hand, is a bright and light-hearted adventure based in a vibrant fantasy world flush with purples, animals, magics, and blockheaded villains.

Horn is going to draw comparisons to Infinity Blade, and it should. It’s an action game built in its mold, offering a guided experience and one-on-one arena combat that’ll have you swiping and tapping out 1:1 finger-to-sword swings.

But to Horn‘s credit, it takes these points of design, runs with them, and makes them slightly more compelling. For example, Horn doesn’t have rails. You have full control over Horn, the game’s boy protagonist. Also, Horn‘s premise isn’t as rigid; as this boy, you’re on the hunt to reach an object, a crystal, and in order to do so, you’ll need to travel to several “dungeons," each of which has numerous environmental puzzles and a slew of pitfalls to scale, avoid, or shimmy across in QTE segments.

Progression in Horn, then, isn’t as simple as slaying a monster and repeating the same fights over and over again — it’s a matter of finding levers or the right object in the environment, killing a boss, and then moving on. You know, progression.

When we asked about the game’s influences, Horn designer Chip Seneni admitted Infinity Blade‘s impact on the design of Dark Meadow, but says Phosphor didn’t “look back" at it for Horn. To him, Horn, a response to what the studio didn’t like about Dark Meadow.

“For Horn though, we really never looked back on these games," Seneni told us via e-mail. “Horn is more influenced by exactly what we didn’t like in Dark Meadow. Regarding just melee combat, we didn’t like how planted you were in combat, so we added the ability toroll around 360 around  your enemy, very influenced by z-targeting in Zelda series. It makes battles feel much more dynamic, to roll right out of a huge attack and then hit an enemy on its side."

“In conjunction we added the Armor system. The armor system, you can break down armor and look for weakpoints on each enemy. Hunting down weakpoints will make enemies die much quicker, so it is a metagame in the fight itself, and makes fighting the same enemy different depending on where the weakpoint is."

And then there’s the narrative component, which is pretty cliche, but it also isn’t just a convenient excuse for repetition. As Horn, you wake up in a crumbling tower, confused, and possessing no memory of how you got there. Horn’s world, which was once so populated and lively, has been broken, its people and creatures trapped in golems fueled by a mysterious crystal. As the early game plods along, Horn realizes that he needs to find this crystal and save the world.

In part, Horn is inspired by Romance of King Horn. Jarod Pranno, the game’s writer, says he the goal was to craft a story that wouldn’t feel too strange. His inspiration was an Old English tale, Romance of King Horn. Horn is an orphan in the game, and, spoiler: he’ll eventually become a hero.

Functionally, the world Horn needs to save is as open as the level design dictates. We spent over an hour with a retail build of the game this morning, and have noticed that Horn uses a loose mission-based system with tightly constructed environments. The freedom of movement is more illusion than anything drastic, but it does help flesh out other points of design. Because you can move anywhere, for example, Horn can have traditional dungeon design elements like, say, levers.

There’s also a hookshot mechanic — which is introduced by a tool you find early on in the game — that expands where you can go, and how you get there. It appears to be utilized as just a side-path, grab-a-treasure-chest thing, though.

Sineni tells us that the early game is “pretty linear," but it opens up quite a bit. “The end game puzzles stump the dev team quite a bit — not that they are mind-benders, but that you really have to pay attention to the world for what you need to do," he said. Horn‘s level design keeps is so tight that it’s almost impossible to move anywhere but the right direction, but there are also orbs in Horn‘s world that function as breadcumb trail.

Collect these orbs, and you’ll be able to construct better gear to take out the world’s various foes. Horn has a hub world that you shoot back to between missions the game’s six main missions. In the middle, there’s a smith where you can forge new weapons — for a price. It’s of note that you can buy the game’s gems with real money via IAP. There are also cosmetic items that you can buy.

The first mission, at least, reminded us of an open-air dungeon. You’ll be plopped into a windy environment on the hunt for a single crystal seed, which just so happens to be strapped to the belt of a gigantic tree-looking monster hanging out at the level’s highest point. To reach him, we had to unlock a lot doors by pressing in switches. We also had to take advantage of a special ability we haven’t mention yet: Horn’s, er, horn. The power of its ruin song smashes pieces of the environment. Special pads indicate where you can play the song and once something breaks, the ruin creates a new path.

This dungeon felt more like a funnel than a brain-buster,  but  there was just enough in the overall moment-to-moment design to keep us moving forward. The novelty of a new game, we suppose. It’ll be interesting to see if Horn builds on the what it offers in this dungeon. If it never takes the training wheels off, it might be in trouble.

Horn‘s combat, while taking more than a cue from Infinity Blade, is pretty noteworthy, too. Phosphor really embraces the whole 3D-ness of the game and enemy design. As Horn, you can roll or evade around enemies and set up attacks that hit their backs. Enemies also have specific weakpoints, which you’ll need to expose by breaking their golem armor.

In the first hour, at least, action has a fluidness to it. You’re constantly moving — dodging and diving in large sweeping motions, attempting to get behind the massive foes you’re facing. Cuts come quick, while enemy pounds are sluggish yet deadly. What helps bolster this is the fact that Phosphor has also removed all combat scripting. Seneni explained:

“A big change early on was to remove the ‘banking’ or ‘queue’ system that Dark Meadow and games like Infinity Blade have," Seneni tells us. “This system has an invisible barrier that prevents you to get an attack in until you have met a criteria of actions, like dodging a certain amount of times. It makes sense for some types of games, but Horn‘s combat is about reacting to the opponent and responding."

“Like more traditional games — Zelda, Devil May Cry, God of War, Batman, etc., —  when the player gets an opening, you are free to take it and damage the enemy. You do not have to wait for the enemy to finish an arbitrary number of attacks before being able to go on the offensive."

We’re pumped to see the rest of Horn. Our time has been short so far, but we’re impressed with the way Phosphor has adapted, tweaked, and added to the structure of Infinity Blade — even if the studio won’t admit the connection. Freeing up movement and adding puzzle-like mechanics, even if they are simple in the early going, gives Horn some meaningful, game-separating oomph.

The only big problems we see as this game rushes to release this week, are technical. In some scenes, the audio cut out on us. In others, the engine started to chug. We also had a big nasty crash in that first dungeon. We’ll keep testing and playing the game on a few different devices and give you a better idea of what to expect on this front.

We’ll also, of course, give you a full review in the near future.