I am what you would call a horror genre fangirl. I wait with baited breath for new installments of Silent Hill (or used to anyway, when Team Silent was at the helm), sucked up every survival horror title that didn’t look totally terrible (and a few that did, just for kicks), and and pretty much lived and died by how perfect I could get a photograph score in Fatal Frame. There’s something about decaying hospitals and shambling, unidentifiable demons that just appeals to me, I guess. I think what this says about me is that I have a taste for the weird, I may or may not collect strange objet d’art, and that I possibly may have a bonafide future as a crazy cat lady. I hope I’m wrong about the latter. 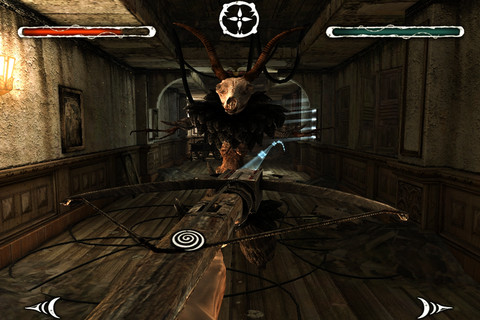 At any rate, the very first screens of The Dark Meadow [$5.99] had me foaming at the mouth, and rightfully so — it was a first person perspective exploration game with pieced-together baddies, a super atmospheric setting, and best of all, powered by the rather esteemed Unreal Engine, which is still winning awards to this day. It had all the makings of a truly standout game on the iOS platform, and I wont deny that my hopes were very high for it.

Speaking of atmosphere, when it comes to making the setting appropriately spooky and weird, The Dark Meadow has it down to a fine art. The game itself looks terrific, and the music is dark without being overpowering or ridiculous. You will navigate your way around with simple touch controls and by moving from spot to spot, which foregoes the need for a directional pad. And I truly appreciated how little clutter there was on the screen — Phosphor Games wanted this to be a clean, immersive experience for the player, and the attention to detail is evident.It’s easy to get lost in this world. 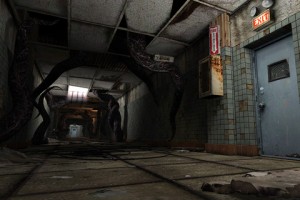 As you explore darkened hallways, you’ll come across baddies that you’ll need to clear out in order to progress. My first few go-rounds with them, I was pretty pleased with the way combat worked. They always appear at a distance, so when you first see them you’ll be armed with a crossbow (and later down the line, other weapons will be available.) You’ll use your finger to aim and you’ll let go when you want to fire, which feels smooth and makes the experience pleasant overall, at least initially.

Once your enemy is really close, you’ll switch to melee. The fights are designed so that you can slash with a finger swipe and dodge by tapping an arrow to the right or left. The game is good about telling you when to act, so if you pay attention, you can really get the rhythm of fights down. For instance, after a dodge, if the game prompts you to “attack now!", it’s time to get your slashes in, but if not, there’s another attack coming, so wait for it. It works a little like a toned down version of Infinity Blade [$5.99], although missing most of the finesse and feeling fairly basic comparatively.

Keep up your fights, and you’ll keep gaining experience, and the game makes sure you know it. After each fight the game grinds to a halt, at which point the game tallies your experience while you wait, which not only feels really unnecessary, but also hurts the pacing of the game. When you hit a level, you’ll be able to assign experience points how you please. Enough of these and you’ll gain new weapons as well, so know that your efforts will be rewarded. 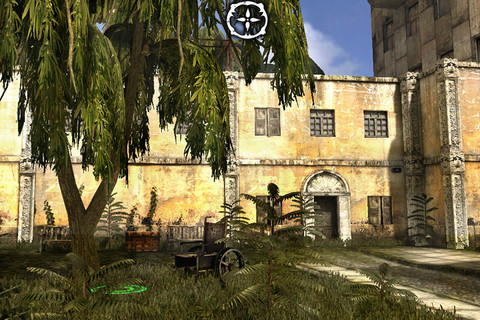 You aren’t completely alone on this journey, either. There’s an old man you’ll meet in the beginning who will communicate with you via radio and give you advice on how to survive in this dark world. His advice can be quite handy (and in addition, it’s pretty decently voice-acted, too). In fact, if you die a few times, he will tell you different things, and some of it is pretty hilarious – -bravo for the writer or sticking in bits of tongue-in-cheek humor! You can also find scraps of paper and notes that will shed some light on the world you’re in and divulge its backstory. It adds some nice detail, some of which will factor in as you get further into the game.

If The Dark Meadow has any weakness, it’s that the fights eventually begin to feel a bit rote, and I found myself wishing creatures would stop popping up so I could just explore my surroundings and progress through the story without hinderances. On the other hand, I’m sure I’d feel the same way if the situation were real, but hey, there’s some pains in the ass in every dark and twisted universe, and this is one of them. As long as you don’t mind the grindy feel to the combat, then you really shouldn’t be bothered by this much.

Overall, The Dark Meadow is a standout in almost every way. From look to setting to the touch-centric gameplay, it shines, and you can tell this title was crafted with much love from its developers. Any horror fan will be thrilled by it, especially if your traditional iPhone fare is stuff like that wretched Silent Hill game [99¢] (even this fangirl couldn’t swallow that.) It’s quite a bit more expensive than the usual iOS title, and it’s worth every bit of the money you’ll spend. It doesn’t quite hit the note of perfection largely becomes of the combat mechanic, but it edges damn close — and even at that distance, it’s well worth your time and money.