In the mid-90s SNK released the first game in one of their most revered series, Metal Slug. The run and gun platformer had become a staple in arcades of the 80s and 90s, and nobody did it with more panache than SNK did with the Metal Slug games. Beautiful hand-drawn art, incredible animations, and buckets of personality were the hallmarks that set Metal Slug above the huge pack of similar games. And of course, the ‘Metal Slugs’ themselves – a variety of vehicles you could hop in and lay waste to everything in sight.

The series was a big hit with gamers too, and it’s typically the third game that is considered the fan-favorite. Like any good sequel it iterated upon previous games by making all the good stuff bigger and better while trimming any fat and adding some new ideas. It was also the last Metal Slug game to be released by SNK in their original form, so there was a sense that they threw everything but the kitchen sink at it to go out big. Indeed, Metal Slug 3 ($2.99) is truly an awesome game that’s been ported all over the place since its release in 2000, and it’s finally arrived on iOS in all its glory. It has the typical control issues you get with a game like this on a touch screen, but with a little forgiveness towards that Metal Slug 3 has easily shot up to one of my favorite action games on iOS. 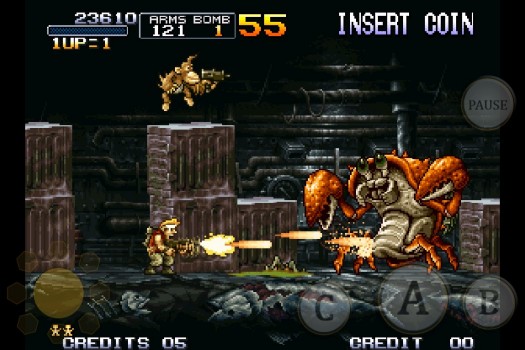 With Metal Slug 3 for iOS, you get everything that you’d expect from the arcade game, along with some nifty bonus features. There are five expansive levels to traverse, some with branching pathways that can lead you through two totally different environments, but they both end up at the same humongous boss fight at the end. There’s also four different playable characters, tons of different weapons to pick up, and a number of crazy vehicles to hop into. It’s Metal Slug through and through, which means deliciously over-the-top action and I love it. 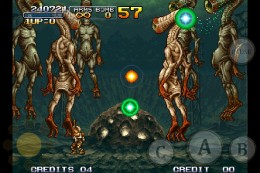 Gamers have known that Metal Slug 3 is a great game for more than a decade though, so the thing that really matters in this review is how this version translates to iOS. That pretty much centers around one thing: the controls. Well, the only way to try and explain it is they’re fantastic as far as virtual controls go but they’re still not ideal in any way for this kind of game. It’s playable, and in many way impressively so, but Metal Slug 3 was designed for physical controls and really demands that kind of precision in order to be truly successful.

Now, just because you’ll have some accidental deaths due to fumbling with virtual controls doesn’t mean Metal Slug 3 isn’t enjoyable. Not by a long shot. With practice I actually warmed up quite well to the controls, starting on Easy difficult to ease my way into things. Surprisingly, Easy is still extremely challenging, but it’s doable and it’s a fun difficulty level for someone who simply wants to play through the game (though it still takes a good amount of skill and effort). If you get particularly adept at the virtual controls, upping the difficulty level offers the additional challenge you might be craving. 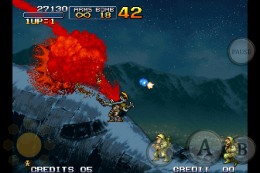 You can move the buttons around the screen if you want, but an auto-fire option is sorely needed as the constant tapping gets old quickly. A small silver lining to the controls is that Metal Slug 3 unofficially supports the iCade. It can be a bit flaky getting it connected, so check with our forums if you find yourself having some trouble, but when it works it’s a marvelous experience.

Beyond the controls, Metal Slug 3 is a very thoughtful port. Performance is solid, and any appearance of slowdown is just because that’s exactly how the arcade version behaves. It also features some new options for screen ratio, a scanlines effect to add to the retro feel, and a video filter to smooth out the edges. This actually doesn’t look so hot on Retina Displays, so I disable the filter and rock a 4:3 ratio with scanlines off for the crispest look. Unfortunately the game doesn’t seem to save your video settings, so remember to change them when you fire up the game fresh. 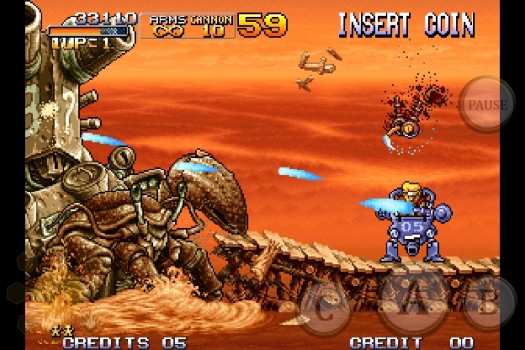 Another nice addition to this version of Metal Slug 3 over its vanilla arcade version is Mission Mode. This lets you start from any level that you’ve previously made it too in Arcade Mode. It’s a great addition as every level in the game is so intricate and the action so fast that it’s easy not to notice some of the finer details, alternate routes, or hidden items. The iOS version also comes with local Bluetooth co-op, and playing simultaneously with a buddy feels like how this game was meant to be played.

It has its share of issues, but ultimately the kind of action and production values found in Metal Slug 3 are enough to trump them. It’s just flat-out an exceptional game, even a dozen years after the fact. The control difficulties will make for some annoying miscues, but it’s as good as you can expect for this type of game on a touch screen. A few touchups like improved iCade support and an auto-fire option would be nice, but as is Metal Slug 3 blows away anything similar that’s currently on iOS.